HUDSON -- The Hudson Area Public Library, underfunded for years, is now at a critical point in its budget.

The library’s reserve budget will be gone by July 2022 if things continue as they are, Interim Co-director Shelly Tougas said, and then significant cuts would have to be made.

“I will strongly assert the library does not have a spending problem, it has a funding problem,” Tougas said.

Cutting options would include reducing the amount spent on collections to $2,400 a year, the minimum required by state law, cutting programs such as summer camps , storytimes and book deliveries, or closing the library on certain days of the week.

How we got here

The joint library formed in 2003 with the city of Hudson, village of North Hudson and town of Hudson, and was joined in 2004 by the town of St. Joseph.

The stated purpose of the agreement was to increase local library funding.

“That was the point,” Tougas said. “That way they could improve library service and the collection for everybody in the region.”

That hasn’t been done, Tougas said.

In 2012, it was discovered that the partnered communities were not meeting the minimum funding levels required by law to be exempt from the county library tax. The loss to the library was $415,670 that year.

“That is more than half of our current funding levels from the four partners,” Tougas said. “And that was just one year.”

No one knew why the paperwork wasn’t accurate, Tougas said, as it had been nine years and many of the original players weren’t around anymore.

At the time the idea of paying the missing funds presented a burden to the communities.

“And to have to do it at the snap of a finger, it just could not happen,” Tougas said.

Instead, the law was changed. The Legislature passed a statute that joint libraries no longer had to follow the minimum funding requirement. The new requirement for joint libraries was funding no less than the average of three prior years.

“It’s set us at a very low baseline with a funding law that disincentivizes funding increases,” Tougas said. “If you decide you’re going to increase funding next year by a higher level, you’ve committed yourself to higher increases in the future.”

If the underfunded $415,000 had been recovered, and the library received a 2% increase annually, it would have more than $1.2 million in funding from the partners.

“That’s a gap of a half a million dollars and that is the core of the problem,” Tougas said.

The Hudson library’s service population is about 30,600, more than double that of River Falls Public Library and three times that of New Richmond library. Its funding, though, is less than River Falls, which is $869,000.

“The reason the difference is so significant is those communities have had to follow the funding law,” Tougas said. 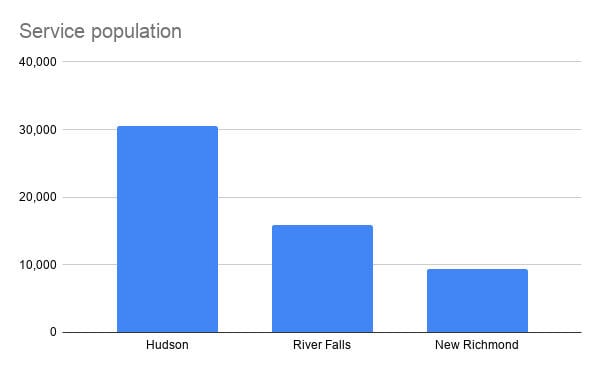 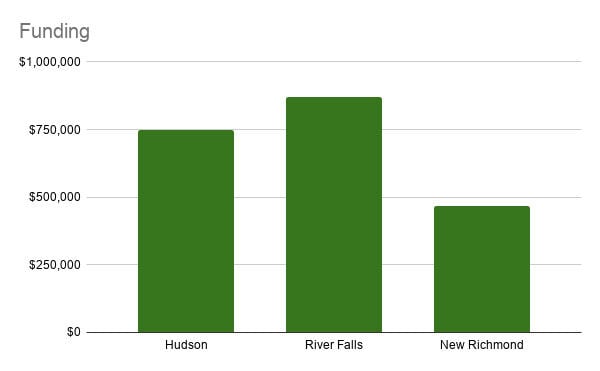 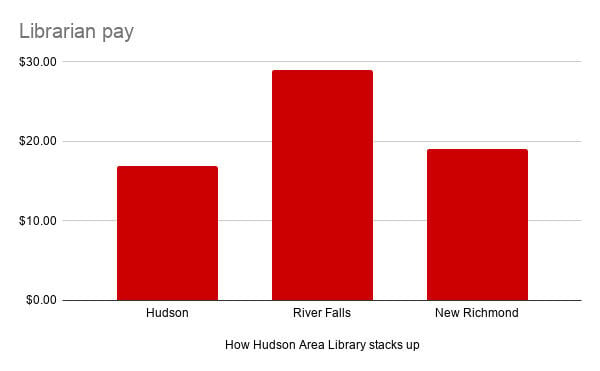 How Hudson stacks up

The library has taken several steps over the years to manage on the underfunded budget. That includes moving money out of collections to operating expenses. It has also used grants from the Friends of the Library and the Hudson Area Library foundation to pay for books.

“It’s like trying to pay your mortgage with your savings instead of your paycheck,” Tougas said. “It’s not going to last.”

Staffing decisions have been the main reason the library has been able to survive the last 10 years, Tougas said.

The majority of the Hudson library budget goes to staffing -- budgeted at $610,636 this year. Currently, the library has 12.5 full-time equivalents. That number puts it below state requirements to be even a minimum service library; there should be 17 full-time employees for Hudson’s size.

Few staff are eligible for benefits and staff wages have been kept very low, Tougas said.

A Hudson librarian, someone with a four-year degree, was making $16.86 an hour.

The library has had a turnover of 17 people in the last year and a half.

The retention and recruitment study would bring librarians up to $25 an hour, still in the lower third of libraries, and create a paid time off plan. The PTO plan was adopted, but the library board opted to raise librarian salaries to $18.50.

If the library were to partially implement its staff retention and recruitment study, it could delay the loss of reserves to 2023.

The library puts on a lot of programs for the community, without using any tax dollars, Tougas said. All funding comes from the Hudson Area Library Foundation and the Friend of the Library. The programs had 20,000 people in attendance in 2019.

Residents of the partner municipalities have saved $3.8 million by using the library, based on circulation numbers.

“If the joining structure doesn’t survive, they’re going to pay significantly more taxes because they will have to pay the county tax,” Tougas said.

The library’s goal now is to sustain service, Tougas said, not add.

“We still want to be lean and mean,” she said.

The cost of maintaining services, implementing part of the retention plan and filling an empty position is about $1.18 million. The current budget is $910,000, and $80,000 of that is coming from reserves.

Current partner funding would need to be increased by almost 50% to get to the $1.18 million.

“That’s a massive increase and it's an incredible sticker shock,” Tougas said.

A 30% increase would allow partial implementation of the retention plan and partially restoring cuts.

Community leaders have recognized what the library has done and what it needs, but they’re also concerned about putting pressure on taxpayers, Tougas said.

The library is planning a stakeholder retreat this summer. Tougas said it would be wonderful to go into 2022 with a step-by-step plan to address the issue.

“To thousands of Hudson residents the library is a very important part of their lives, even their daily lives, and a significant community asset,” Tougas said.