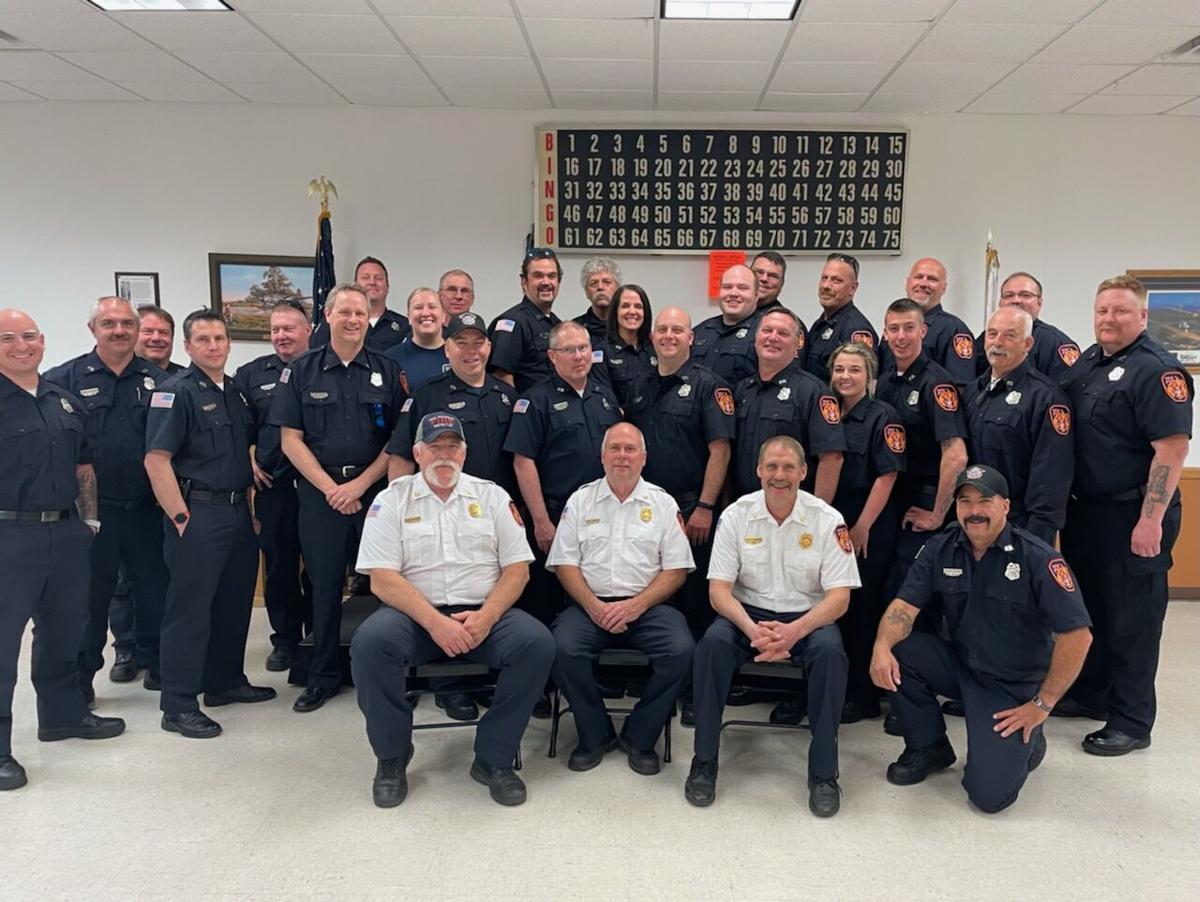 Members of the New Richmond Fire and Rescue during the department's annual banquet on May 17, 2021. 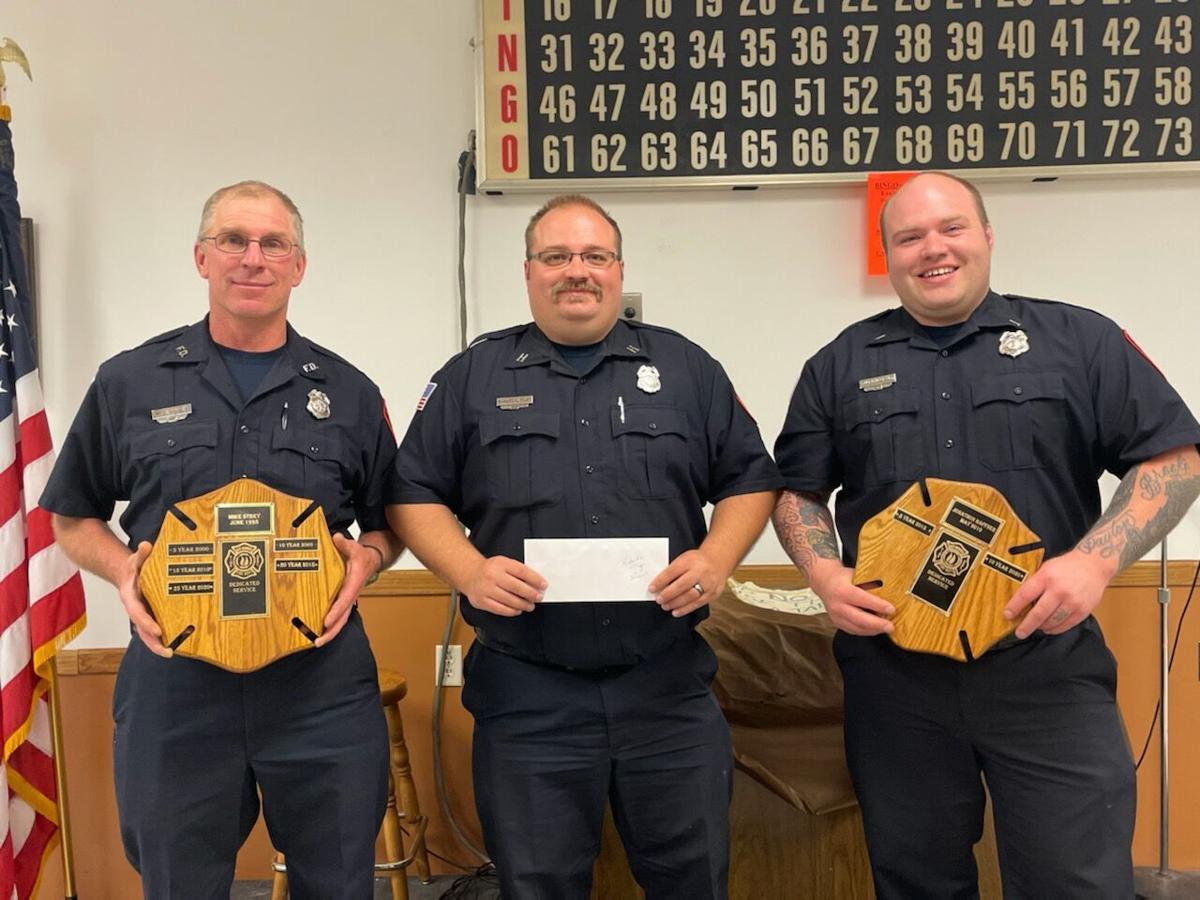 Mike Strey, Richard Haffner and Jonathan Haffner were recognized for their years of service at the New Richmond Fire and Rescue annual banquet. Submitted photo

Members of the New Richmond Fire and Rescue during the department's annual banquet on May 17, 2021.

Mike Strey, Richard Haffner and Jonathan Haffner were recognized for their years of service at the New Richmond Fire and Rescue annual banquet. Submitted photo

NEW RICHMOND — The New Richmond Fire & Rescue held its annual banquet May 17, after missing a year due to the pandemic, according to a release from the department.

Like many Fire Departments across the nation, the men and women who volunteer for New Richmond Fire play such an important role in the local firefighting effort. In some cases, neighbors, friends, and relatives leave their jobs and their families to answer this special call to service.

In light of the many additional continuing education classes required for firefighters, NRF&R has taken steps to recognize and reward firefighters for their years of dedicated service. As dedicated members of our community, the department depends on their commitment now more than ever.

Mike Strey continues to be a very active member of the department, even after serving for 25 years. Strey has held various positions, from firefighter, driver operator, lieutenant, captain, and currently, that of a lead operator, as well as an essential part of Station II in Star Prairie. Strey has logged countless hours at both fire stations, and hopes to continue serving the department for many years to come. He has worked for the City of New Richmond Utilities Department as a Low Voltage Lineman for the past 23 years.

Richard Haffner has served with the department for 15 years, holding the position of officer for the past 10 years. He is currently a captain and serves as the health & safety officer, as well as the committee chair for recruitment and retention. Richard Haffner was also a Department of Defense contractor for 18-months, spending time overseas as a firefighter and fire educator in Iraq, Kuwait, Saudi Arabia and the United Arab Emirates. He has worked for 3M for the past 12 years, as fire test engineer and building supervisor for 3M Fire Protection Products, helping to test and develop products to keep people and properties safe.

Jonathon Haffner has served with the department for 10 years, taking time away from family and other activities to respond to emergencies throughout the fire district. Jonathan Haffner is currently a lieutenant, and has served as the chair of the apparatus committee for the past 4 years. He served his country in the United States Air Force, and is currently employed as a full-time firefighter for the city of St. Paul.

Doug Frandsen has been with NRF&R since 1999, and serves as a wildland firefighter with U.S. Fish and Wildlife Service. He is currently the manager of Nobel’s Tire Service in New Richmond. Roger Lindloff has been an integral part of the department for 33 years, serving as a member of every committee at one time or another. Lindloff recently retired as manager of Speedway in New Richmond. Robin Haffner has been with NRF&R for almost 35 years. He served for 6 years in the United States Marine Corp, transferring to the Air National Guard, where he served as a Firefighter. He retired after 23 years as the Deputy Fire Chief of 133rd Airlift Wing. He also retired from the St. Paul Fire Department in 2016, and is currently the owner/operator of Haffner Construction. This year’s awards ceremony was very special to Robin, as he was able to present awards to both of his sons.

When someone enters the fire service, they make the decision to dedicate themselves to serving and sacrificing for others; sometimes even making the ultimate sacrifice. Many don’t fully understand just how much time and commitment is required of our volunteer firefighters when they make that decision to serve.

The members of New Richmond Fire & Rescue have seen good times and bad, joy and sadness, but have always shown dedication to each other and the communities they serve. Firefighters are routinely exposed to elements that may have an adverse effect on their health and well-being, yet they continue to commit themselves and volunteer their time. That is why each year’s awards ceremony is so important; although it is a small token honoring their dedication.

New Richmond Fire & Rescue would like to send their thanks and appreciation to all devoted past and present members of the department.