In 2019, a planning team began talking with department staff about their needs and projected growth.

The existing facility was built in 1993. Since that time, St. Croix County has become the second fastest-growing county in the state of Wisconsin.

To meet the growing needs of residents associated with that growth, the county, working with Klein McCarthy Architects, developed a master plan that proposes additions to the Government Center Building as well as a renovation to the existing building. This new expansion and renovation is projected to meet the county’s needs for the next 20-30 years.

Elsbury explained one of the concepts that will allow the county to continue to occupy space as it needs it going forward is leasing space. By building rentable space in this phase, as the country’s needs grow over the next decade plus, they can terminate those leases to accommodate growth, but until then, the leases provide revenue decreasing the burden on taxpayers.

This expansion is divided into four phases. Phase 1 is currently in progress and includes a Sheriff’s impound lot and expanded staff parking to the south and.a new storage building to the north  to house facilities maintenance, emergency vehicles and Sheriff’s Office storage. 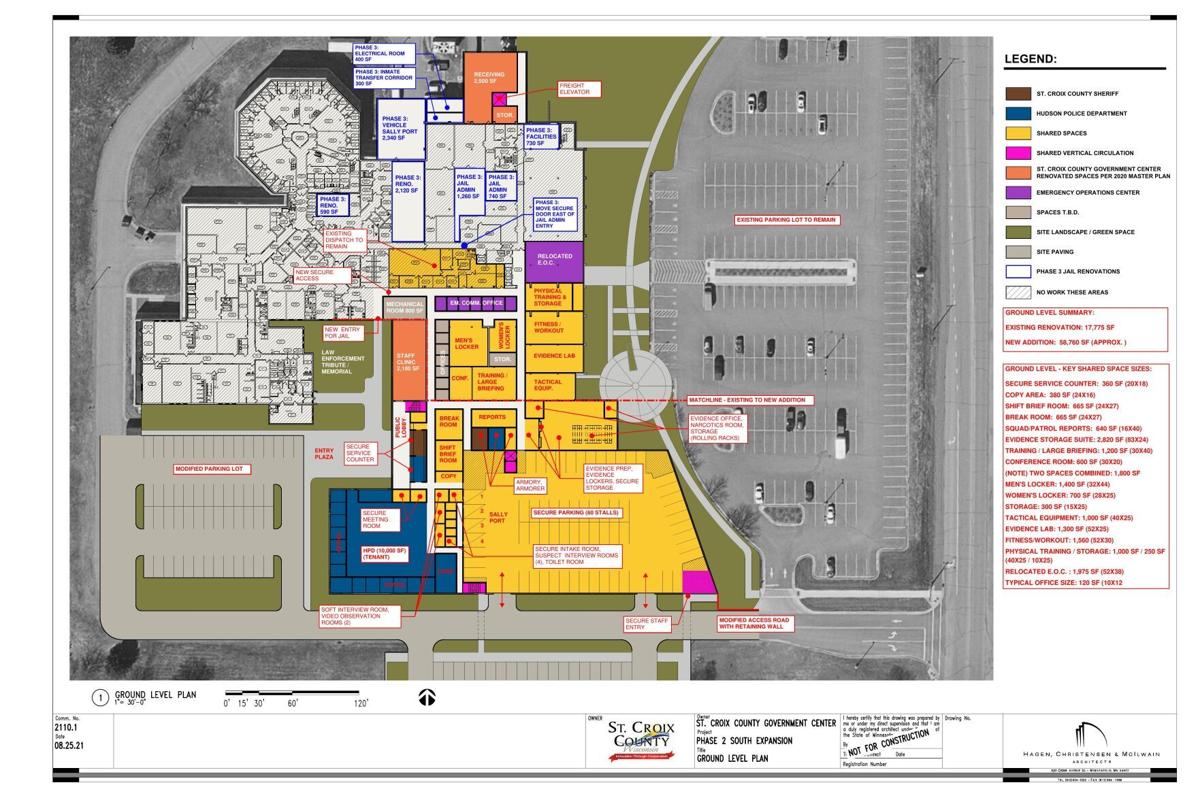 The discussion with supervisors Tuesday, Dec. 6, was focused on Phase 2. Phase 2 consists of  a south building addition, a north building addition and renovations to the existing building. The renovation converts the first level of the government center to courts services while moving the current first level departments to the south addition. The south addition will accommodate a new public entrance, lobby, adequate security screening, secure judicial circulation, administration departments, secure parking, and evidence processing. The north addition will provide a receiving garage, freight elevator, and expanded courts services. Floor plan can be viewed at government-center-expansion-floorplans

The budget for Phase 2 of the Government Center expansion is $87,436,451. Without taking into consideration revenue generated from tenants or the county’s growing tax base, the initial impact on property taxes would be $40 annually per $100,000 in property value. The mill rate would increase from its current $3.11 to $3.51. A more detailed explanation of the impact on taxpayers can be found at: Phase 2 Impact on Taxpayers

“Now is the most cost-effective time to do this for our taxpayers. Interest rates are the lowest we’ve seen in well over 30 years,” said County Administrator Ken Witt.

One of the primary focuses of Phase 2 is public safety with the combining of the Sheriff’s Office and Hudson Police Department resources. Both departments would do more than share space including training areas, they will integrate some of their capabilities including the processing and storage of evidence.

“One of the questions Administrator Witt brought up was, ‘How would it work, combining with  Hudson PD in this building?’ Aside from the money (saving money) which is obviously number one, number two it's a willingness and a cooperative motion to get this going. I was all on board. Chief Geoff Willems and I have known each other for a number of years. I think this makes complete sense that as we look to expand, that we do it with other partners,” St. Croix County Sheriff Scott Knutson said.

“This really makes sense from our perspective because we spend a lot of time working in collaboration with the Sheriff’s Department, working with the DOC, and working with Human Services. Having to go to all of those other locations takes time and ties up resources. Having access to all of that in the same building, just a walk up stairs or across the hall is much more efficient,” Hudson Police Chief Geoff Willems.

“We’re very early in this process. We’ve focused a lot on, ‘How do we fit this on to this site and how do we want to improve this site not just for the next 20 years but for 30 years and beyond.’ The immediate strategy as far as infrastructure, the ring road and the utilities, those are starting to happen now as part of Phase 1.

“The long-term strategy is to include tenants to help fund the project and be co-residents in the facility, but when the county needs additional space in 20 or 30 years it’s there as the county continues to grow,” Mcllwain said.

Elsbury emphasized that the floor plans and renderings are still conceptual at this point and exist to make sure enough square footage has been designed to accommodate all of the needs identified by county staff and other stakeholders. More tweaking and changes are expected as more folks get a chance to see the plans and discussions continue.

If the Administration Committee decides to recommend the project it will be considered by the full county board at its Feb. 1 meeting.

Details and updates on the project can be found at: Government-Center-Expansion.