Bruce Olson lost his eleven-year battle with cancer on October 7, 2021, two days before his 62nd birthday. Bruce was born October 9, 1959, to Alice and Edward Olson in New Richmond, Wisconsin. Bruce is preceded in death by his father Edward, his brother Jack, father-in-law Walter, brother from another mother Tim Hanson and many beloved cousins, aunts, and uncles.

Bruce married Monica (Bille) Olson June 21, 1986, in Rhinelander, Wisconsin. Bruce had one child (Stephanie) from a previous marriage and two children (Sarah and Matthew) with Monica. Bruce’s hobbies included restoring Schwinn bikes, building fly fishing poles and fly lures, coaching kid’s baseball, Boy Scout Leader, homebrewing, a love of music, watching the Brewers, Badgers, and Packers games, and outings with his wife in search of unique bars and supper clubs. His children and grandchildren were the light of his life. Throughout his life he worked as an auto mechanic, cell site technician and audio-visual specialist, with his last job before retirement being with Sound Installations.

Being an introvert, Bruce loved deeply but rarely shared his feelings with others. His love of Facebook was evident by his ease of expressing himself with his wit and charm and will be missed by many. He had a special relationship with his mother-in-law Jan Bille, brother-in-law Mark Bille, and nephew and niece Dustin Bille and Taylor Hermes. Nathan Anderson and Heather Whitcomb also held a special spot in his heart.

A memorial service will be held at St. James Trinity Lutheran Church in Fall Creek, Wisconsin on Wednesday, October 13, 2021. Visitation is 3-5pm with a service at 5pm. Masks are required. 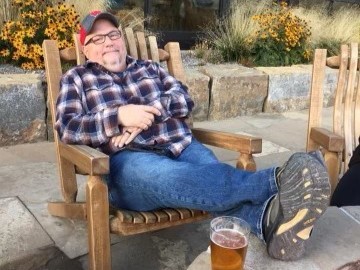