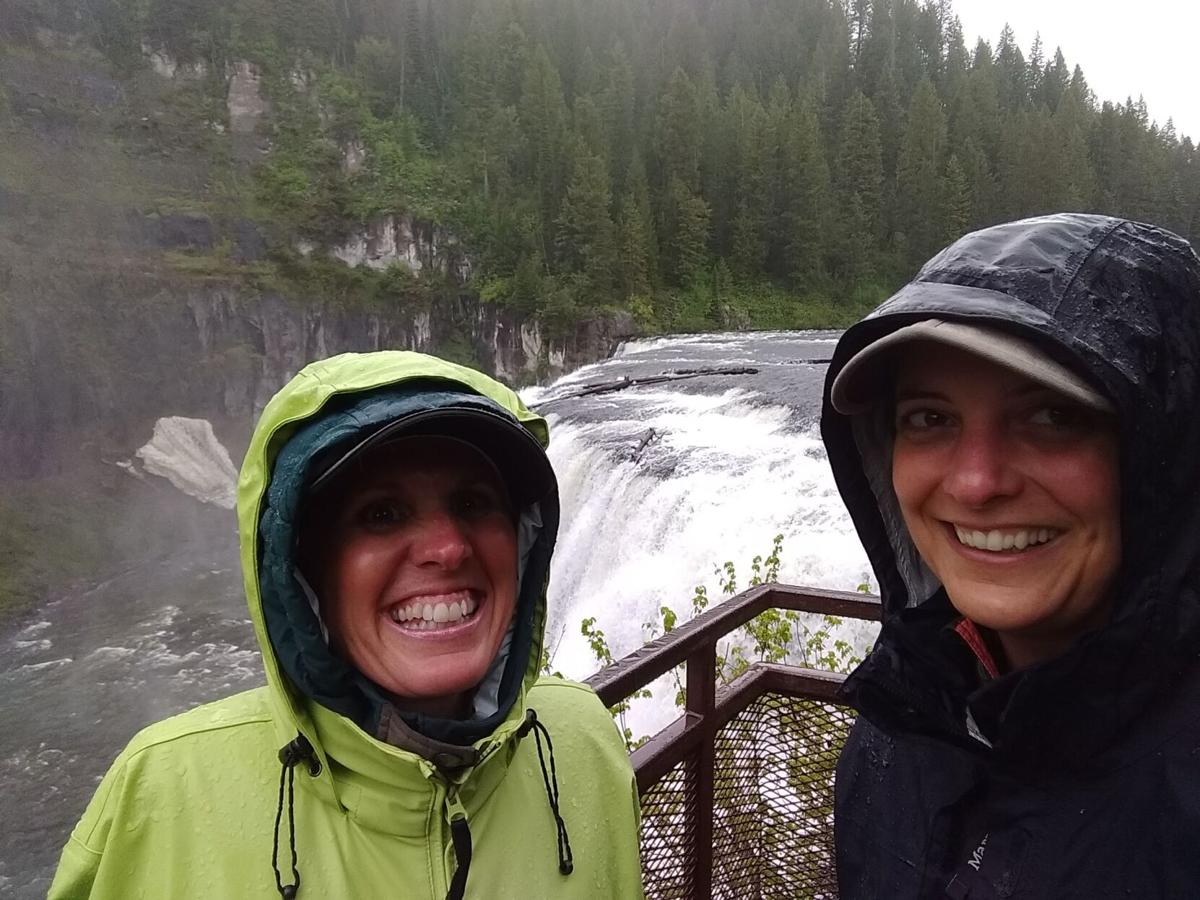 Kris Millgate and Emily Stone stand above a rushing river in Idaho. 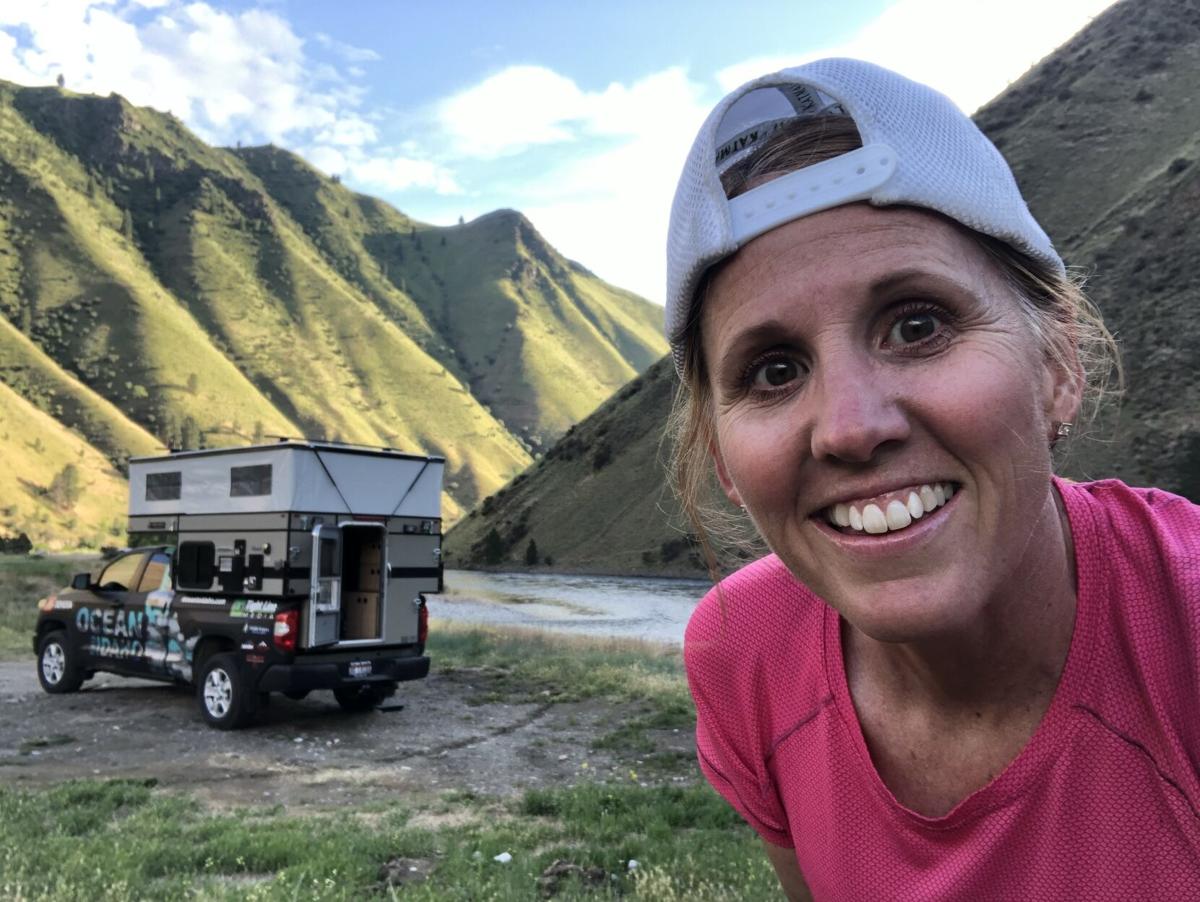 My friend Kris Millgate snapped this photo of herself during a huge road trip she took to document the challenges that Chinook salmon face as they travel from Idaho to the ocean and back. Her new documentary film, Ocean to Idaho captures that journey.

Sometimes, on a gray day during the shoulder season, a phone call from a friend can be just the thing. Yesterday, Kris Millgate’s familiar, throaty voice beaming through space brought a smile to my face and a wave of memories, too.

Kris and I met in Montana, at my very first Outdoor Writers Association of America (OWAA) conference. I’d only just joined the group as a way to network with other outdoor journalists in my brand-new role as a newspaper columnist for the museum.

I’d checked a box on my registration requesting a conference mentor, and Kris had volunteered. “I take my job as mentor seriously,” she told me upfront. That was almost as intimidating as her resume.

After years in TV journalism, with the requisite pretty face to match, Kris became a freelance writer, photographer and filmmaker. She hunts, fishes, hikes, rafts, flies a drone and keeps up with two hockey-playing boys.

Behind that pretty face is a whip-smart brain that’s always going 10,000 miles a minute, and below it are limbs filled with muscle and determination. I listened in awe as Kris told stories of her adventures (and mis-adventures) and dished out sage advice on how to be an award-winning journalist.

When I stopped by Kris’s home in Idaho Falls on my road trip to Alaska in 2018, she gave me a tour of some of Idaho’s wildness. It was different than Wisconsin, but the deep forests, clear rivers, and cold spring rain felt very familiar. I love making connections between ecosystems across the continent, so last summer, when Kris decided to make a documentary about the challenges that Chinook salmon face on their great migration from the Pacific Ocean to her neighborhood, I knew I wanted to bring that story to Wisconsin.

Chinook salmon aren’t doing well in Idaho. Despite what Kris calls “the best spawning habitat you could ever want” in her state, fish get stymied by dams in both directions. On their way out to the ocean as fingerlings, calm pools behind the dams slow the little guys down. Humans employ fish ladders, barges and trucks to help the salmon get around the walls we’ve built in the water. After the salmon have fed in the rich ocean food chain and grown to be as long as your arm, they must once again navigate eight dams in their quest toward the spawning ground.

In response to salmon’s decline, humans have set up hatcheries to buoy the population enough for sport fishermen to catch and members of the Shoshone-Bannock, Yakima, Umatilla, Warm Springs and Nez Pierce tribes to exercise their treaty rights.

Not unlike GLIFWC protecting hunting and fishing rights in Wisconsin’s Ceded Territories, the Columbia River Inter-Tribal Fish Commission works to protect tribes’ right to catch fish by making sure that there are fish to catch in the first place.

Kris’s documentary about the challenges facing Chinook salmon began with what she called “a doozy of a road trip” during the pandemic last summer. She captured that journey in her documentary “Ocean to Idaho,” and also in her book “My Place Among Fish,” which details the backstory and the outtakes in her humorous, high-energy style.

I’m thrilled that on Dec. 7 the museum is hosting her first film screening east of the Mississippi. Kris will Zoom in to The Rivers Eatery in Cable to share her story and the film, and answer questions afterward. Redbery Books will have Kris’s book on hand. (More information is at cablemuseum.org.)

It's possible that some long-lost cousins of the Idaho Chinook who Kris followed are currently living in Wisconsin waters. Chinook were first introduced to the Great Lakes in 1877, and successive plantings spread them throughout all of the Great Lakes. In Wisconsin, they are most abundant in Lake Michigan from Kenosha to Green Bay. The populations are completely supported by hatchery fish, though, since streams flowing into Lake Michigan don’t provide the right spawning habitat, and no successful reproduction occurs. That’s the opposite problem of Chinook in Idaho, where ideal spawning habitat exists -- just out of reach.

While not as prominent as out west, dams in Wisconsin impact fish, too. I’ve written before about sturgeon in the Couderay River who are moving back upstream after a small dam was removed. Those incredible fish are still absent from the upper Namekagon, though, due to additional dams.

As I looked out of my window at the gray November sky and listened to Kris recount 850 miles of personal and ecological challenges, I asked her how she still sounds so upbeat.

Yep, I thought with a smile on my face, a phone call from a friend can be just the thing.