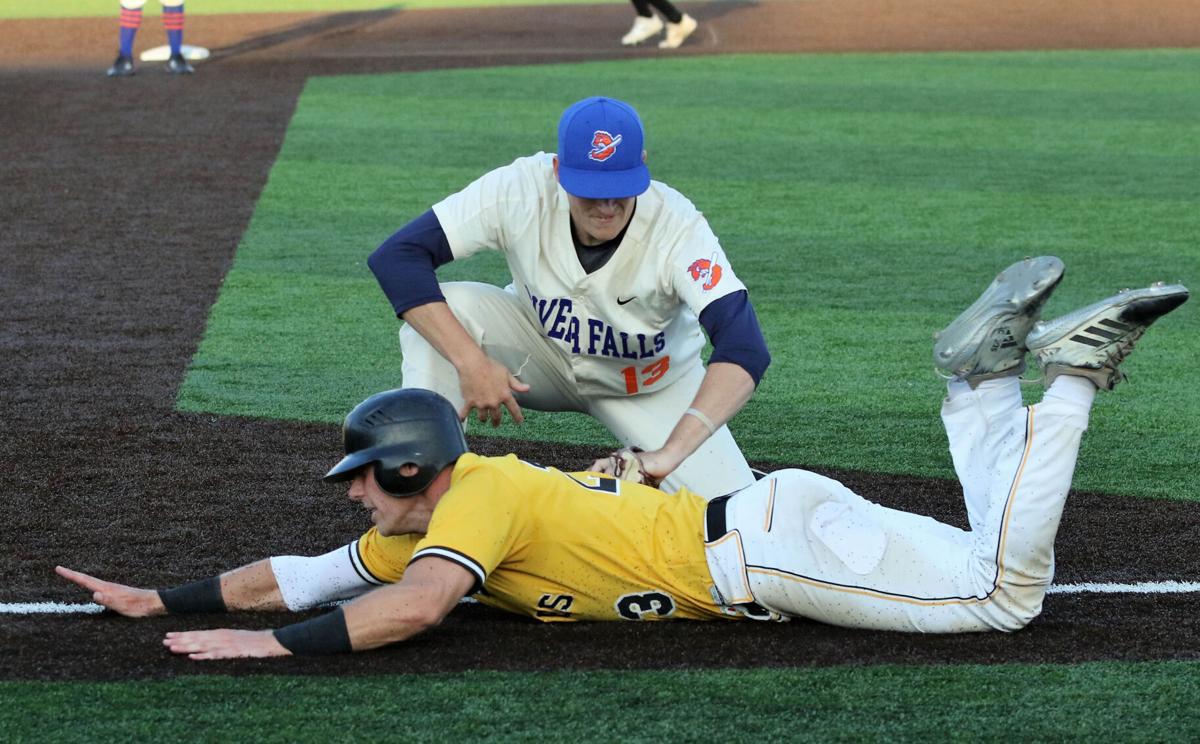 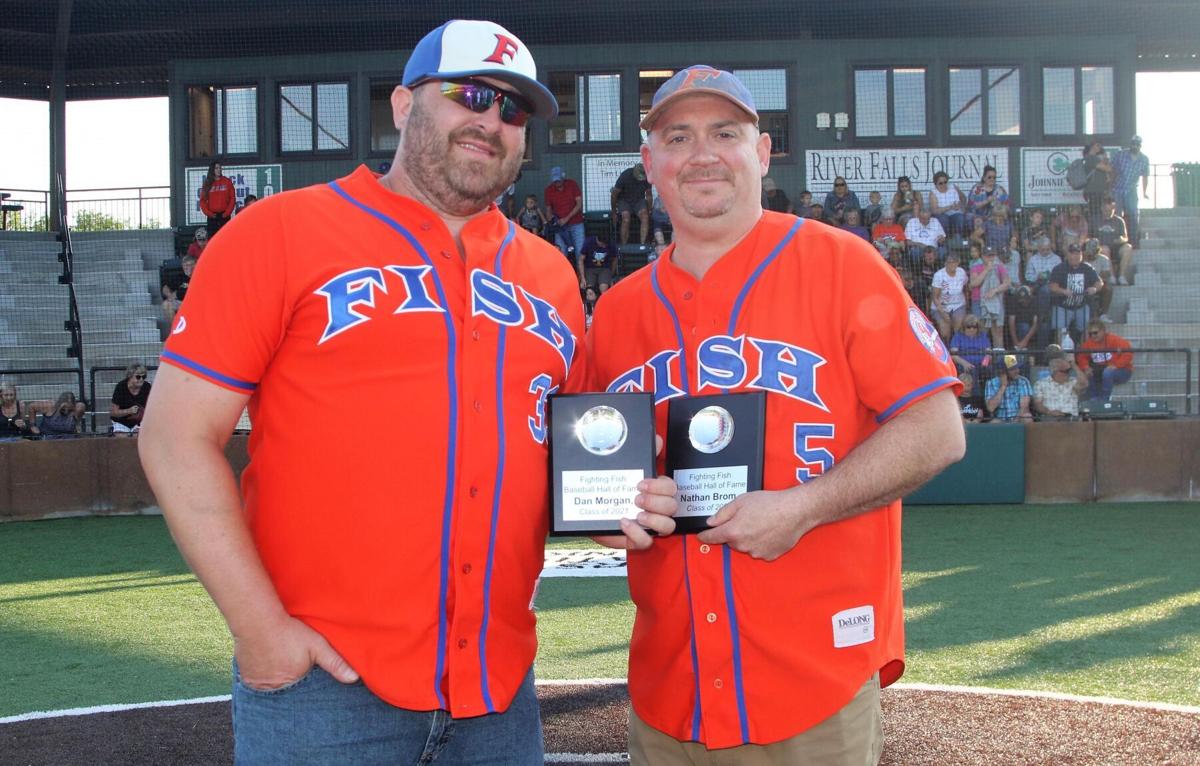 They passed all three with flying colors.

After Morgan and Brom were honored before a packed crowd at First National Bank of River Falls Field that included a number of their former teammates Saturday night, the Fish went out and took care of Prescott 7-5, sparked by a three-hit, two RBI night from Ty Denzer.

River Falls followed that up with an 8-6 matinee victory over the Plum City Blues Sunday afternoon at First National Bank of River Falls Field.

The pair of league wins bumped the Fish’s record to 9-1 in SCVBL play, two games ahead of second place Spring Valley. Coupled with non-league victories over Baseball365 (MPLS) Wednesday night, and the Hastings Hawks Friday, the Fish have won five straight overall to improve to 21-4 on the season.

Denzer singled and scored River Falls’ first run of the game on a double by Spencer Diedrich in the bottom of the first inning Saturday night against Prescott before singling and scoring on a sac fly by Diedrich in the fifth to snap a 3-3 tie. He delivered a two-run triple in the sixth to push the Fish lead to 7-3.

Lucas Luedtke also had three hits in the win and scored a run while Diedrich, Carter Elliott and Brian Giebel all doubled.

Jake Lindsay earned the pitching victory, allowing three earned runs on six hits with three strikeouts and three walks. Jaxin Larson gave up one run in three innings of relief with a pair of strikeouts while Elliott allowed one Pirate run in the ninth.

Statistics from Sunday’s win over Plum City were unavailable at press time.

After a non-league game against the Faribault Lakers Wednesday, June 14, the Fish will return to SCVBL action by hosting the New Richmond Millers Saturday night, July 17, at 7 p.m. The Millers are coming off a 10-7 loss to the Bay City Bombers last Friday night that dropped them to 2-7 in league play.

River Falls will end the weekend with a matinee game at the Elmwood Expos Sunday, July 18.

Hunter Frey hit a three-run home run in the top of the eighth inning to lift the Hudson River Rats to 4-3 victory over the Ellsworth Hubbers Friday night, July 9, at Bob Young Park in Ellsworth to even their SCVBL record at 5-5.

Hudson trailed 2-1 before Frey cleared the fence in left field after following a single by Nate Witte and two-out walk to Jack Erickson.

Ellsworth scratched out a run in the bottom of the ninth and had the tying run at second but Hudson pitcher Paul Johnson got a strikeout to end the game.

Isaiah Grancorvits hit a solo home in the fourth inning for the River Rats first run of the game. Frey and Grancorvits accounted for half of Hudson’s eight hits in the game.

Johnson went the distance on the mound to earn the win, allowing three earned runs on five hits with eight strikeouts and three walks.

The River Rats, now 10-6 overall, will hit the road for a pair of league games this weekend-- Friday night, July 16 at the Osceola Braves and Saturday night, July 17, at the Menomonie Eagles.