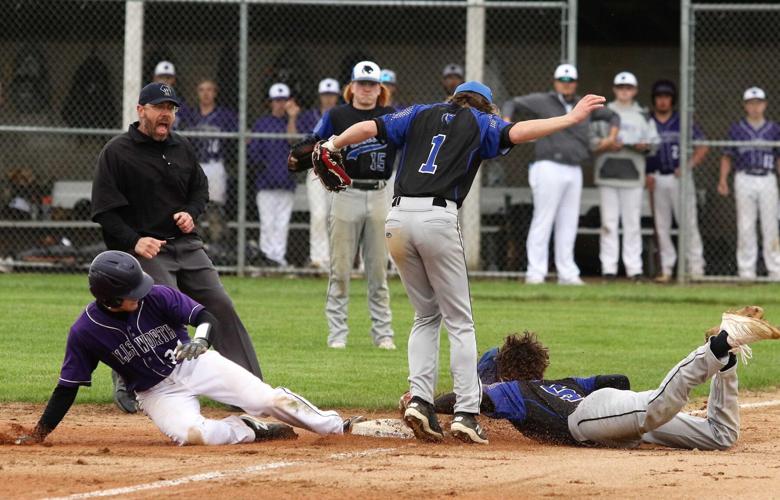 St. Croix Central third baseman Kyle Trainor (5) dives to beat Ellsworth’s Urban Broadway to the bag for a force out as Panther shortstop Jack Sundeen (1) tries to get out of the way in the third inning of the Panthers’ 3-2 victory over Ellsworth in a WIAA Division 2 regional final Thursday, May 26, in Hammond. Trainor knocked a grounder down the line and chased it into foul territory before diving back to the bag to get the out. Bob Burrows / Star-Observer photo 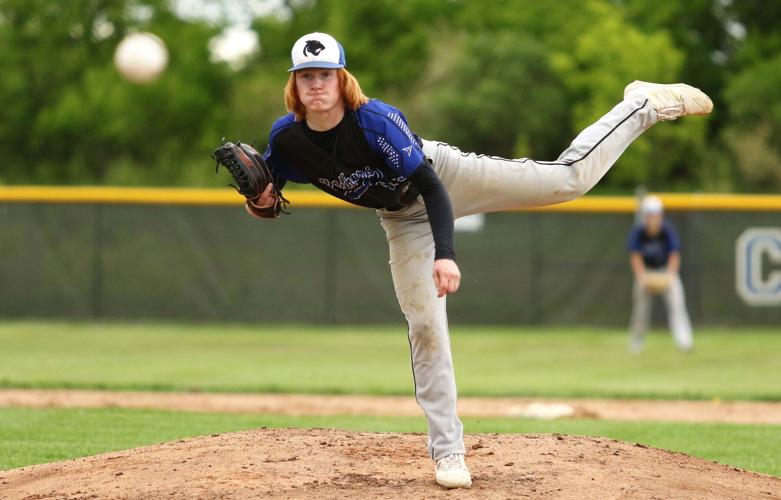 St. Croix Central pitcher Eli Ponath follows through on a pitch to the plate in the second inning of the Panthers’ 3-2 victory over Ellsworth in a WIAA Division 2 regional final Thursday, May 26, in Hammond. Bob Burrows / Star-Observer photo

The ability to come back late in games continues to pay off for the St. Croix Central baseball team.

Central needed a late surge to knock out Ellsworth in the opening round of the WIAA Division 2 regional tournament on Thursday. Central scored once in the sixth inning and twice in the seventh to eliminate Ellsworth, 3-2. This win moved Central into the regional final against Baldwin-Woodville Tuesday, May 31. Central is the fourth seed in the region and B-Wis the top seed, despite the fact that Central won both meetings between the two teams this season.

“Neither game was a flukey win, both were solid wins,” Central coach Brad Sauve said of the two victories against B-W.

Ellsworth got the early advantage in Thursday’s game, scoring two unearned runs in the first inning. Central’s pitching dominated from there, allowing Ellsworth three baserunners in the final six innings. Two of those runners came at the start of the third inning on a walk and a single to start the frame. The next Ellsworth hitter lined a smash down the third base line, where it deflected off the glove of Central third baseman Kyle Trainor. He scrambled after the ball and dove to the bag to get the forceout, arriving a moment ahead of the Ellsworth runner.

“It was the defensive play of the game,” Sauve said.

Central’s run in the sixth inning was due largely to Jack Sundeen. He led off the inning, then stole second and third. He scored on a sacrifice fly by Eli Ponath.

The winning rally in the seventh inning for Central started with one out, when Dylan Wilke singled. Mason Sullivan then smashed a single down the third base line. Central sophomore Owen Talladge then delivered his biggest hit of the season. He pounded a pitch that carried to the right field fence for a double. Sullivan showed his speed by scoring standing from first base on Talladge’s blast.

Ponath pitched the first six innings of the game for Central, allowing two hits and striking out five. Eli Babler pitched a perfect seventh inning to get credit for his sixth win of the season.

Central closed out their Middle Border Conference schedule on Monday, May 23, when they won at Amery, 12-0 in six innings. Central scored in five of the six innings, highlighted by a four-run fourth inning.

Sundeen, Ponath, Sullivan and Mark Albright each had two hits. Sundeen was the quintessential leadoff hitter. He stole four bases in the game and he scored four of Central’s runs.

Ponath pitched the first four innings of the shutout, with Babler closing out the game. The win left Central in fifth place in the MBC standings with a 7-7 record.