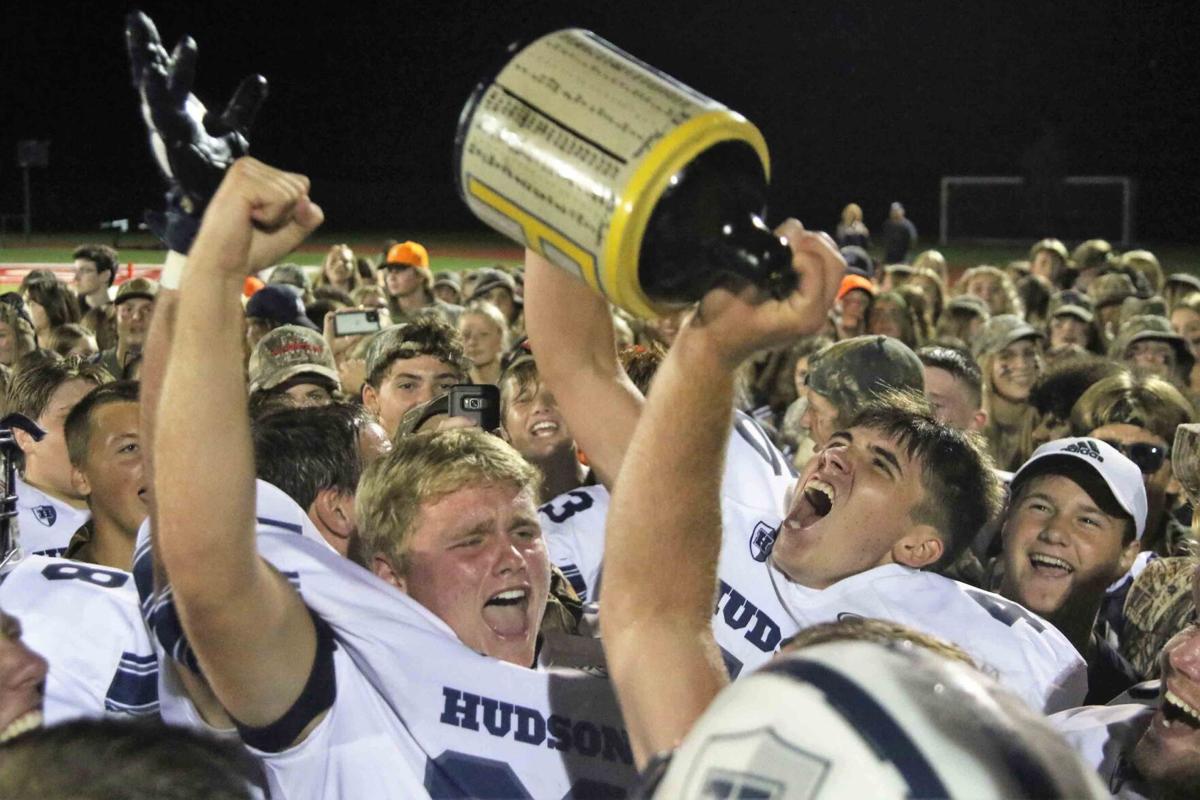 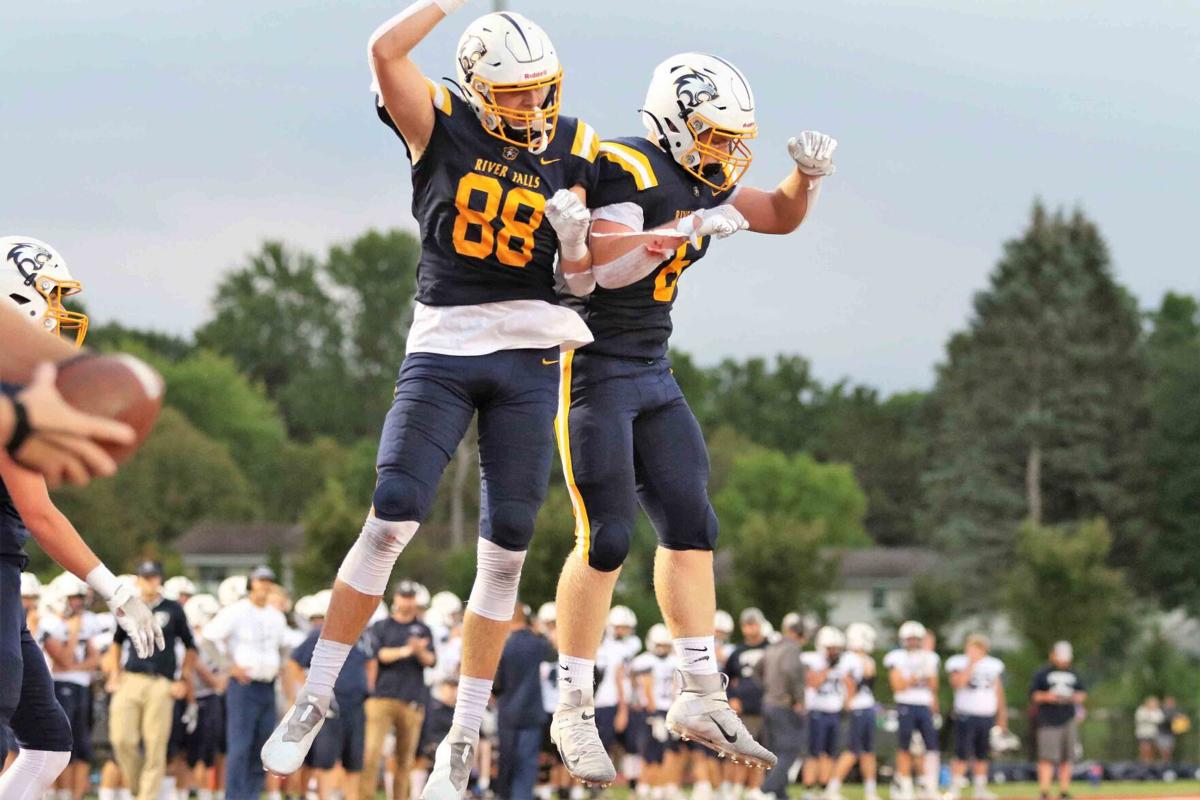 River Falls’ Ethan Campbell (88) and Cade Myszewski (6) celebrate after Campbell caught an 11-yard touchdown pass from quarterback Vito Massa in the second quarter of the Little Brown Jug game in River Falls Friday night, Aug. 27. The Wildcats made the 2-point conversion to tie the score 14-14, but Hudson got a 30-yard field goal with three seconds remaining in the game to pull out a 29-28 victory. Bob Burrows / Star-Observer photo

There have been a lot of memorable games in the previous 103 meetings between River Falls and Hudson. But the 104th could arguably be at the top of that list

In a game that featured three lead changes in the last five minutes, Hudson got a 31-yard field goal from sophomore Jack Strong with three seconds left to pull out a 29-28 victory Friday night in River Falls and keep possession of the Little Brown Jug for the second straight year.

“This feels fantastic!” Hudson senior Will McDonald said as the Raiders and their student section celebrated with the jug on the visiting sideline. “I’m on cloud nine!”

Strong’s kick came after the Wildcats had taken their first lead of the game on a 13-yard touchdown pass from Vito Massa to Cade Myszewski with just over two minutes remaining to tie the score 26-26. Cole Evavold barrelled over for the two-point conversion and the Wildcats went up 28-26.

But River Falls wouldn't go away easily. After the Cats fell on the Raiders’ squib kick near midfield, Massa’s desperation pass was hauled in by Ethan Campbell near the Hudson 10-yard line, setting up a series of laterals that ended with the Raiders falling on the loose ball near the 20 to set off the celebration.

“Our coaches were preaching-- just stay locked into the game,” McDonald said about the closing seconds. “All of us were just ready for it. We knew that this was for the jug and we were dialed in.”

Hudson coach Adam Kowles said he talked to his players all week about finishing, and that’s what they did Friday night.

“We weren’t finishing very well in practice early in the week,” he said. “Our practices have been really good but almost almost too intense early because they’ve just tailed off in that last half hour. So we got on the guys and said you’ve got to finish practice, because if you finish practice, you finish the fourth quarter. And that's what they did.”

Hudson struck on its opening drive of the game when Bounting took a pitch from a yard out one play after quarterback Carter Mears had broken free for a 37-yard gain. River Falls answered with a 76-yard drive, ending with a 13-yard touchdown pass from Massa to Michael Schurman, but the missed extra point kept it a 7-6 game.

Hudson extended its lead to 14-6 on the first play of the second quarter when Mears hit Bounting for a 54-yard touchdown. But River Falls came right back when Massa found Campbell in the end zone for an 11-yard score. Evavold converted the two-point run and the score was tied 14-14.

The Raiders marched 80 yards on the ensuing possession, ending with a 21-yard touchdown run by Jaidan Warner. But River Falls’ Wyat Bell blocked the extra point to keep it a six-point game at the break.

Midway through the third quarter the Wildcats recovered a bad Raider snap at the Hudson 32, and Evavold ended the short drive with a seven-yard touchdown run to tie the score 20-20.

Mears scored on a one-yard keeper with 4:58 remaining and the missed extra point left Hudson with a 26-20 lead, setting the stage for River Falls’ go-ahead score with 2:03 left, followed by Hudson’s game-winning field goal.

River Falls coach Ryan Scherz said he feels good about his team heading into its’ one and only season of MVC play before the Cats return to the BRC next year.

“I certainly think we've played two outstanding teams,” he said, referring to the Wildcats’ first two games against Menomonie and Hudson. “Those are two teams that are probably going to be at the top of the Big Rivers. And I think that our guys are well prepared to play every game on the schedule. Assuming that they bring the same level of preparation and intensity that they brought to these first two.”

Hudson’s victory Friday night keeps the Little Brown Jug, the traveling trophy the two teams have played for each season since 1953, in Hudson for the second straight year. Hudson has won 12 of the last 13 meetings between the two teams but River Falls leads the “Jug Series” 36-21 and the all-time series 55-49.