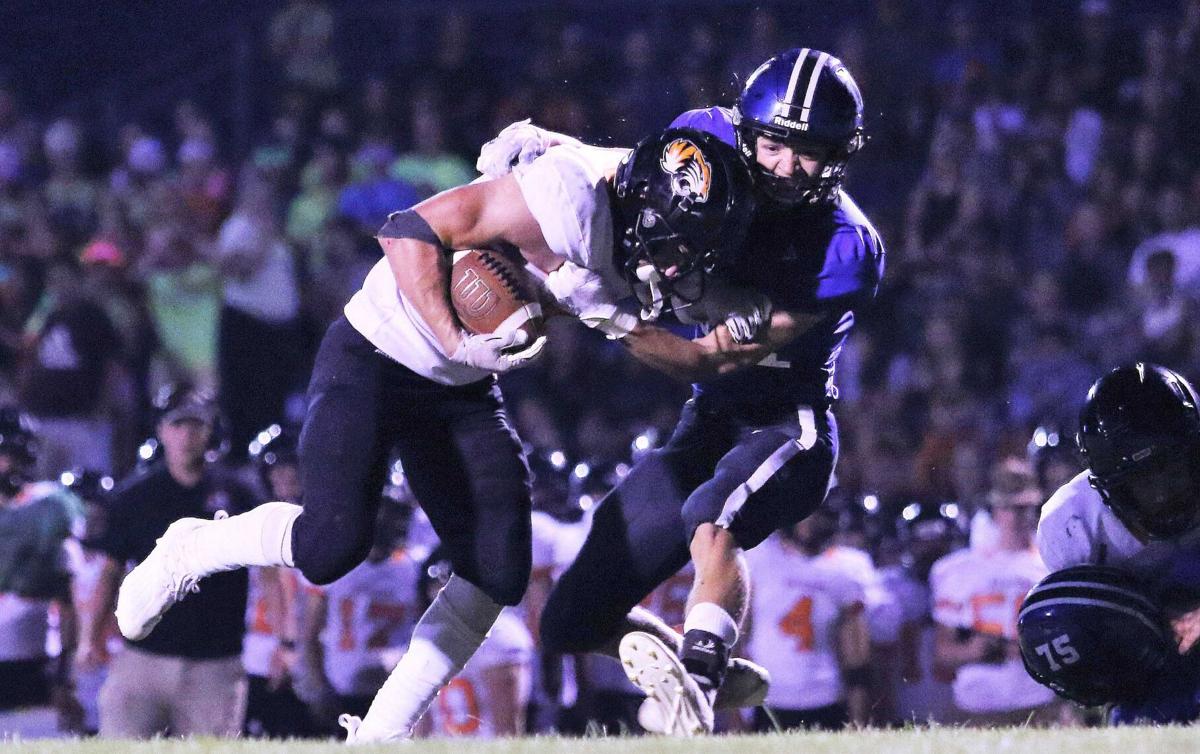 St. Croix Central’s Kyle Trainor wrestles down New Richmond’s Andrew Trandahl at the four-yard line early in the fourth quarter of the season opener for both teams Friday night, Aug. 20, in Hammond. One play Ethan Turbeville barreled over for the touchdown and Trey Cork added the extra point to extend the Tiger lead to 17-7. Bob Burrows / Star-Observer photo 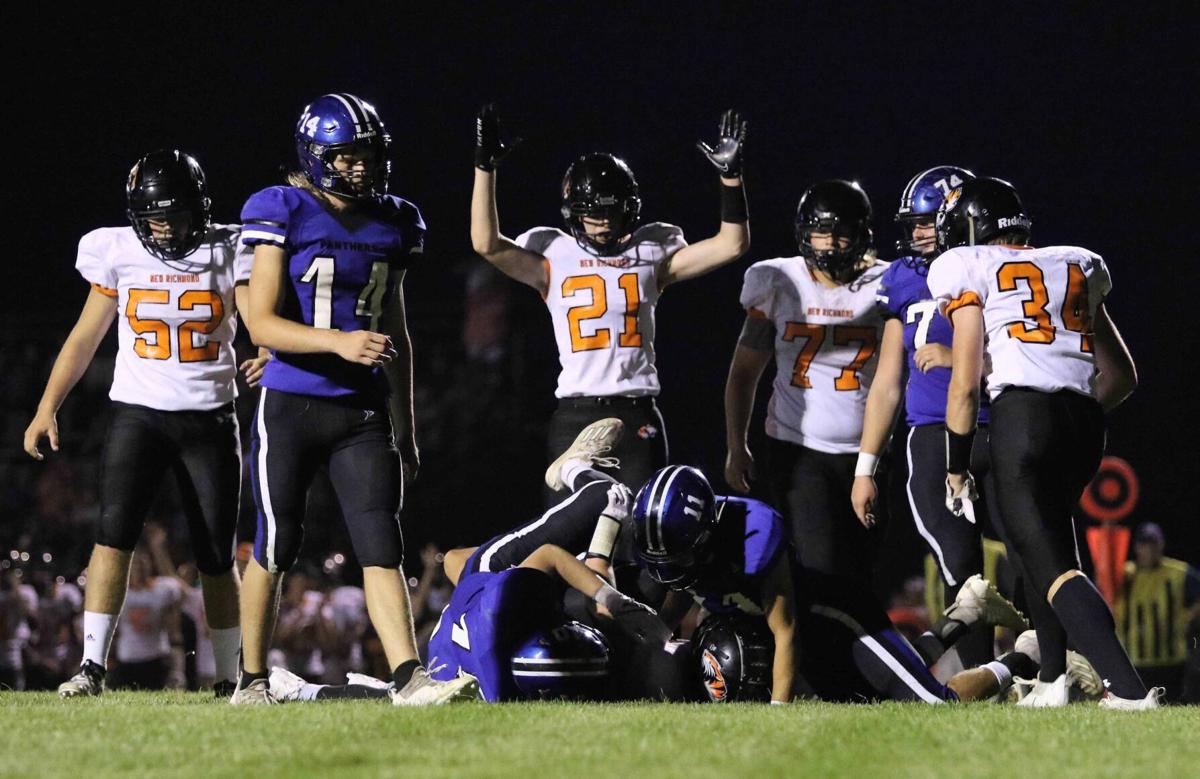 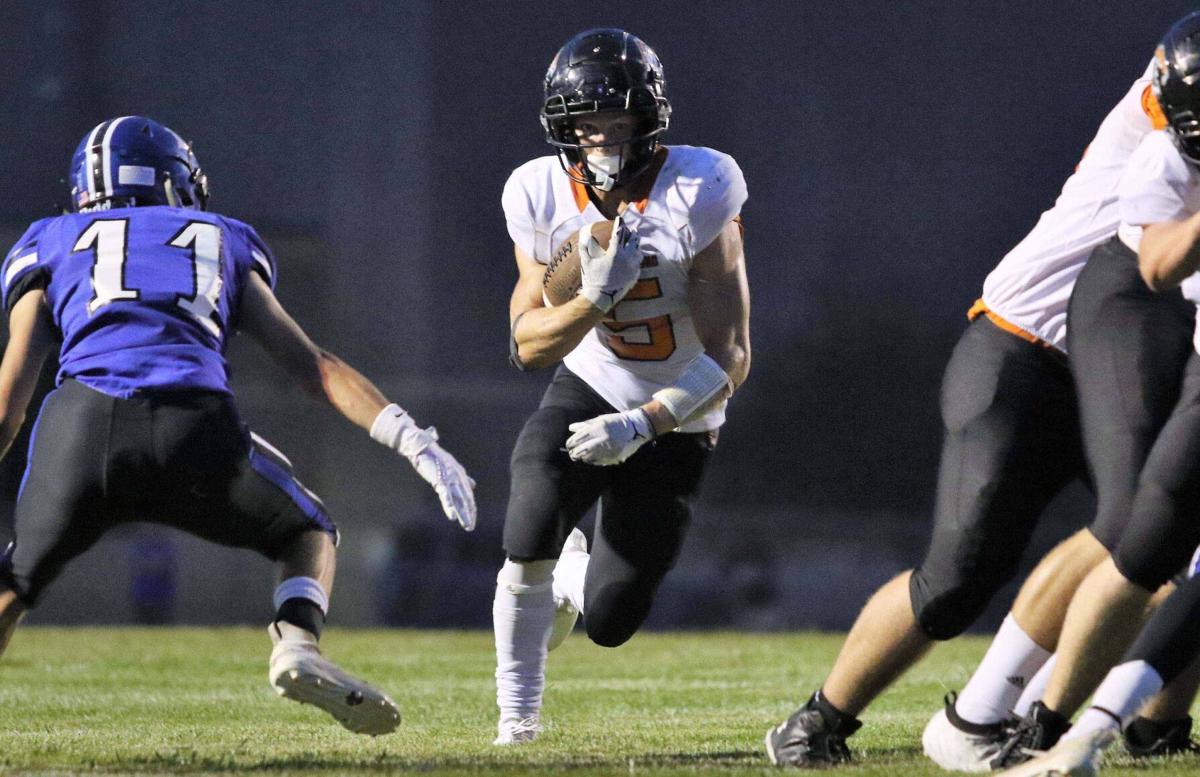 The New Richmond and St. Croix Central football teams have only faced each other five times since SCC joined the Middle Border Conference in 2015, but in that time, the two teams have developed a fierce rivalry.

The intensity of their rivalry showed on Friday night when they met on the Panthers’ home field. Both teams flashed plenty of possibilities, but New Richmond was able to complete more of its chances to capture a 24-14 win at Central.

New Richmond leaned heavily on its wildcat formation to pull out the victory. In the wildcat, the ball is directly-snapped to running back Andrew Trandahl. He then either runs with the ball, hands it to running back Ethan Turbeville, or hands it to receivers Kennan Stowers or Brock Unger on a jet sweep.

New Richmond coach Reggie Larson said leaning on the wildcat was not the Tigers’ game plan. He said the dominance of St. Croix Central’s defensive front forced the Tigers into that package.

“We got manhandled up front,” Larson said. “Their linebackers did a really nice job blitzing and (all-state lineman Carson) Hinzman was unblockable.”

Trandahl carried the ball 33 times for 137 yards, though Larson said he does not want Trandahl carrying the ball that often in every game.

The defenses dominated early through a scoreless first quarter. Central’s scores both were the result of Tiger miscues. The first came early in the second quarter when Hinzman wrestled the ball away from Trandahl, recovering the fumble at the Tiger 4-yard line. Parker Shackleton punched the ball into the end zone to give the Panthers a 7-0 lead.

This is where the Tigers switched to the wildcat, and they immediately drove downfield for the tying score. Unger capped the lengthy drive, scoring from five yards out on a sweep to the right.

The first half ended 7-7, but the Tigers took a quick edge in the third quarter. The Tigers drove inside the Panther 10, before Trey Cork booted a 21-yard field goal to put the Tigers in front, 10-7.

The next Tiger possession ended in an interception by Colin Hackbarth, a Panther senior who switched from cross country this year. The Tigers went exclusively with the Wildcat formation after that.

Early in the fourth quarter the Tigers extended the lead to 17-7 when Turbeville slashed into the end zone from four yards out.

The Panthers kept pressing the Tigers. After a short Tiger punt, the Panthers drove 15 yards for a score. Fullback A.J. Holmgren zipped through a hole from five yards out for the score that cut the margin to 17-14 with 5:52 left in the game.

New Richmond’s big play ability then stepped up to put the game out of reach. A minute after Central scored, Stowers took a handoff, swept to the right and raced 60 yards down the sideline for the final touchdown of the game.

Larson said New Richmond’s defensive effort Friday ranked among the best the team has produced in his years of coaching. He said Cork and Chris Rachner led the powerful defensive effort. The Tigers had 277 yards of total offense, compared to 176 for the Panthers.

Central coach John Tackmann said the Panthers played well in some aspects of the game. He said the defense generated a good pass rush, but has to get better when defending the run. Panther quarterback Ethan Boettcher rushed for 103 yards on 14 carries. He was forced into double duty in this game, also playing safety because two of Central’s starting defensive backs were sidelined with injuries.

Both Central and New Richmond will continue their non-conference schedules next Friday. Central hosts Elk Mound. New Richmond will play at Somerset in Larson Bowl III, where Tiger coach Larson will face off against his father, Somerset coach Bruce Larson.