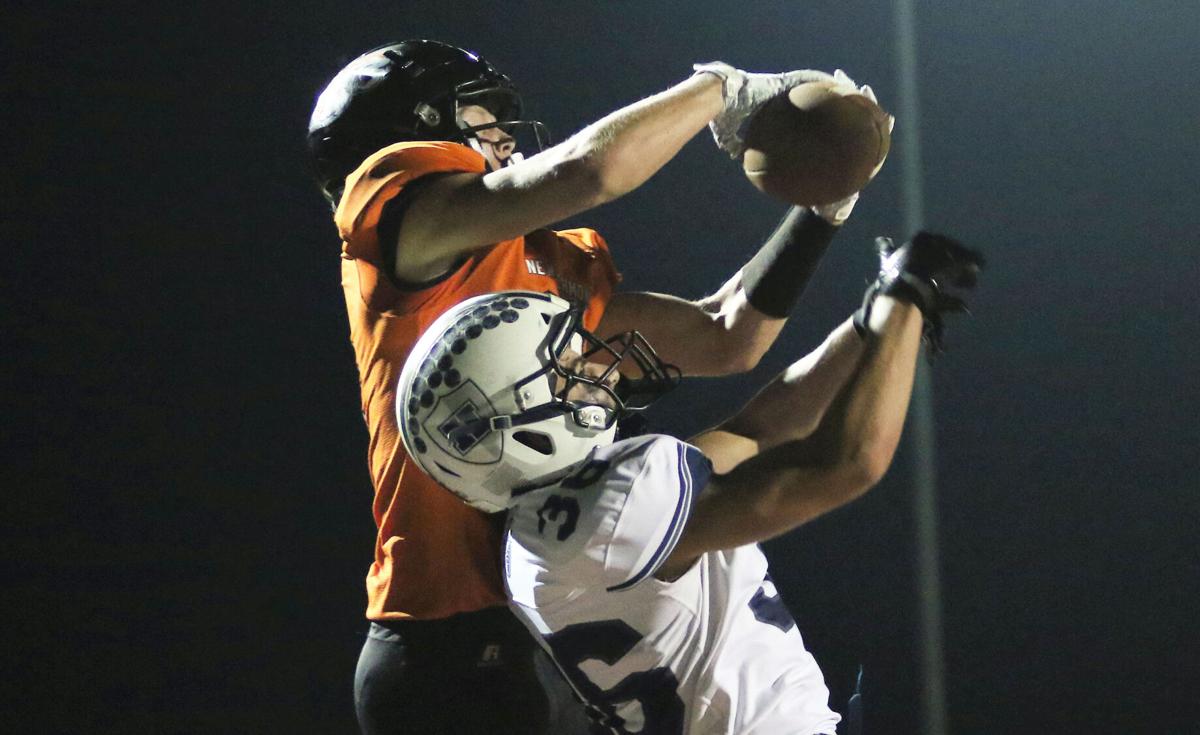 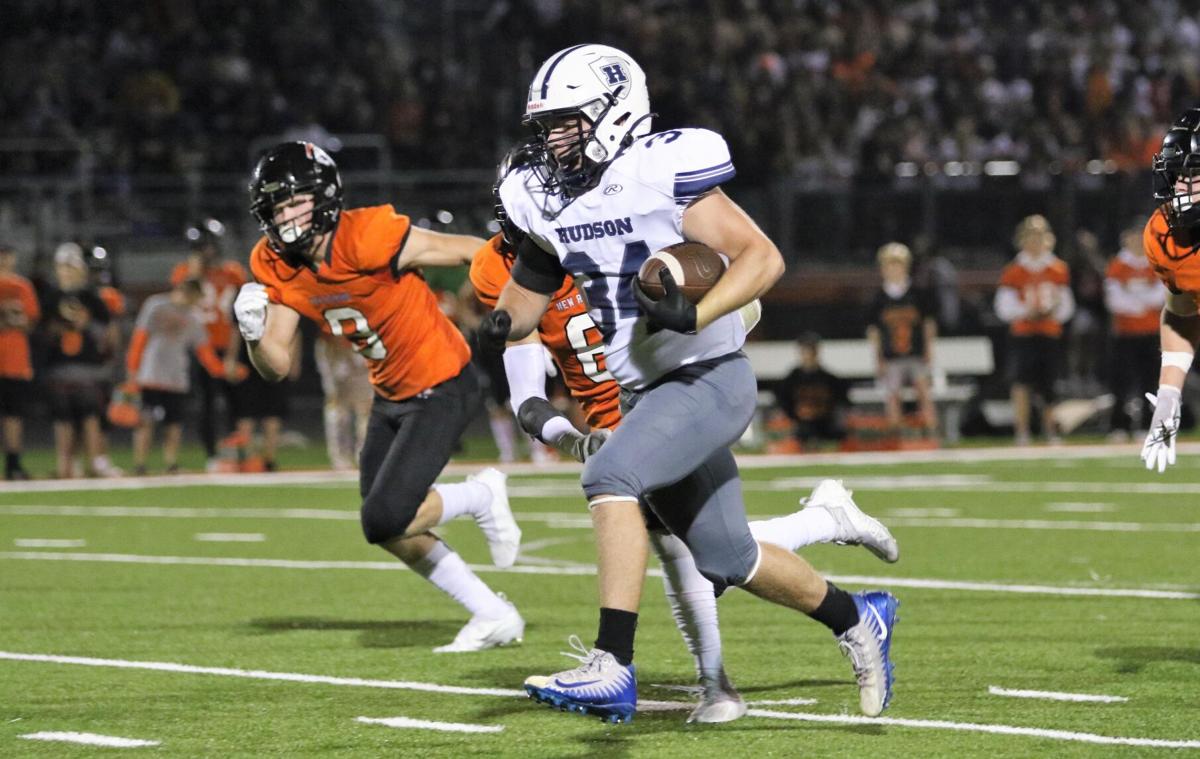 Hudson’s Hunter Schurtz (34) breaks free for a 43-yard touchdown run to give the Raiders a 7-3 lead over New Richmond early in the second half Friday night at New Richmond’s Tiger Stadium. Bob Burrows / Star-Observer photo 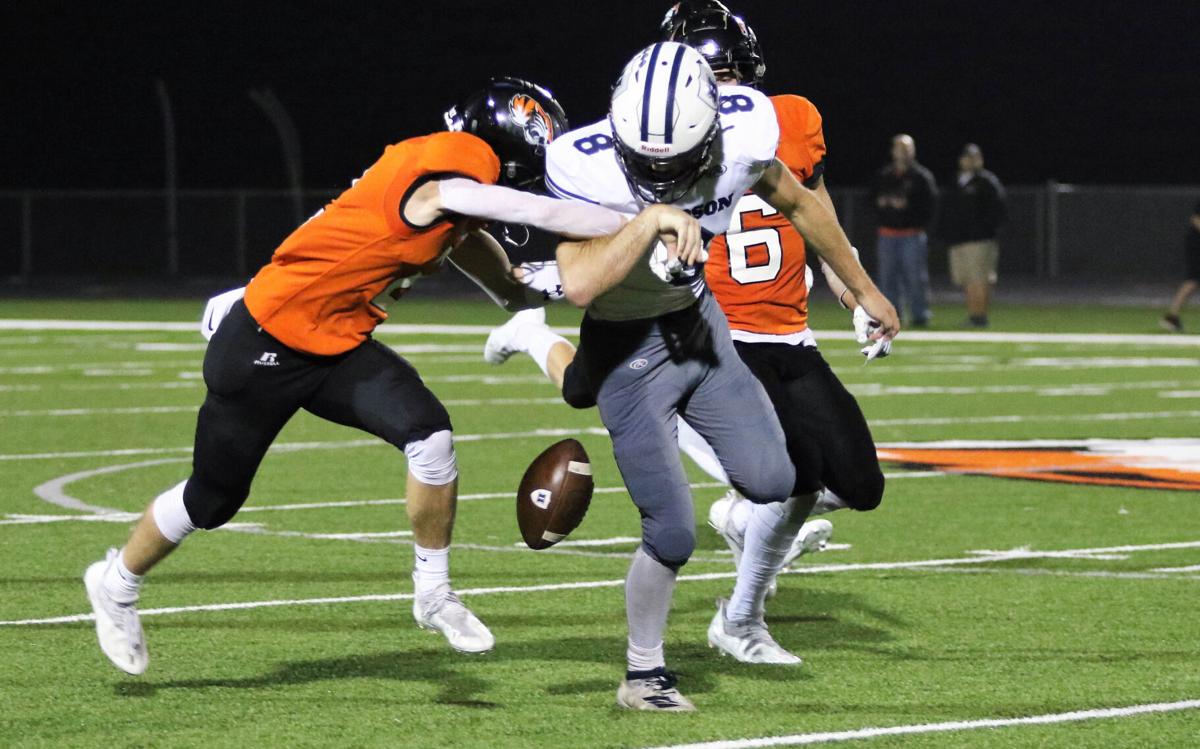 New Richmond’s Brock Unger strips the ball from Hudson quarterback Carter Mears from behind at the end of a long run by Mears in the second half of the Tigers’ 10-7 victory over the Raiders Friday night, Oct. 8, at Tiger Stadium. Bob Burrows / Star-Observer photo

Friday night’s Big Rivers Conference football game between New Richmond and Hudson at Tiger Stadium in New Richmond may not have been pretty, but it certainly was entertaining. Especially if you’re a Tiger fan.

Hudson turned the ball over five times while New Richmond overcame two turnovers of its own to hold on for a 10-7 victory and punch its first ticket to the postseason as members of the BRC.

“I'm speechless,” Tiger coach Reggie Larson said after the game. “I'm just speechless. That is the most funI've had coaching football as a part of this team. And I think all of our assistant coaches would have that same exact message.”

The tone of the game was set early when the Raiders fumbled the ball away at the Tiger four yard-line on their first possession of the game. New Richmond’s Brock Unger picked off a pass on Hudson’s next possession to keep it a scoreless game through one quarter of play.

The Tigers finally put the first points of the game on the board when Trey Cork connected on a 28-yard field goal with 45 seconds remaining in the first half, three plays after Tiger quarterback Seamus Scanlan hit Drew Eckert for a 42-yard gain down to the Raider 15.

“That was huge,” Larson said about Cork’s field goal. “We were talking on the headset about trying a field goal and I don’t know because I always get worried about the block and scoop and score with high school kids. But I was like well, he’s made a bunch in practice from out there. So we went for it and he crushed it. I think it would have been good from 40.”

A nice return of the second half kickoff by Tim Hasapopoulos set the Raiders up close to midfield, and after one first down Hunter Schurtz outran the Tiger defense 43 yards and Jack Strong added the extra point to give Hudson a 7-3 lead.

The lead was short-lived, however. Starting at their own 32, Scanlan found Drew Effertz behind the Raider defense all the way down to the Hudson 24-yard line before hitting Effertz with an alley-oop in the corner of the end zone from nine yards out to put New Richmond back on top, 10-7.

Hudson’s miscues continued on its next two possessions before the Raiders got a turnover on a Braden DuCharme interception at their own 39. After trading punts, Hudson’s fourth fumble of the game gave the Tigers the ball with 4:02 remaining and the Tigers worked the clock down to 2:17 before fumbling the ball back to Hudson at their own 34.

The Raiders reached the Tiger 32 when a second down pass intended for Hasapopoulos in the end zone was just out of his reach. When the Raiders’ 4th-and-9 pass fell incomplete with 31.4 seconds left, the Tiger bench and homecoming crowd erupted.

Larson said it was great to get a win over the BRC co-leading Raiders on the Tigers’ homecoming.

“The kids were fired up and they brought a lot of energy,” he said about the raucous New Richmond student section. “And that makes it all the more fun. They're just really happy for our kids. That's unbelievable.”

Check out 21 photos from New Richmond's homecoming victory over Hudson