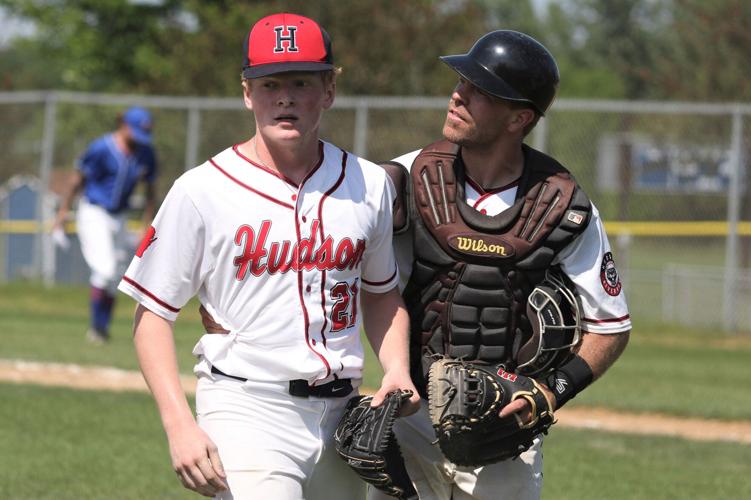 Hudson River Rats’ 33 year-old catcher Mitch Lewis, right, gives 18 year-old pitcher Owen Weadge (21) a pat on the back after Weadge recorded the final out with the tying runs on base in the Rats’ 7-5 victory over the River Falls Fighting Fish Sunday afternoon at Grandview Park. Bob Burrows / Star-Observer photo 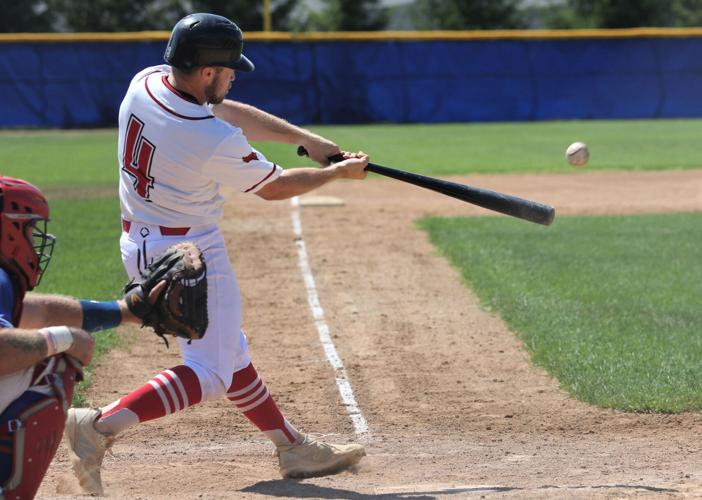 Hudson’s Hunter Frey hits the ball hard for a fly out to left for the second out of the bottom of the seventh inning in the River Rats’ 7-5 win over the River Falls Fighting Fish Sunday afternoon at Grandview Park. Bob Burrows / Star-Observer photo

The St. Croix Valley Baseball League leading River Falls Fighting Fish were clinging to a 3-1 lead over the fifth-place Hudson River Rats in the bottom of the sixth inning Sunday afternoon at Grandview Park when, depending on how you looked at it, either the wheels came off for the Fish or the Rats had one of their best rallies of the season.

The Rats ended up scoring six runs in the inning to take a 7-3 lead before holding on to post a 7-5 victory and snap the Fish’s 10-game SCVBL winning streak.

The inning started with Hudson’s Mitch Lewis drawing a leadoff walk with the Fish leading 3-1. Nate Witte followed with a grounder to shortstop Trey Larson and Larson flipped the ball to second baseman Brian Giebel for the force before Giebel relayed the ball to first base for what the Fish thought was a double play.

But the umpire ruled that Giebel never touched second base, and that the throw to first was late. So instead of having two outs and nobody on, the River Rats had nobody out with two on and proceeded to take full advantage of the break.

After Hunter Frey singled to load the bases, Isaiah Grancorvitz ripped a two-out double to tie the score. Teddy Donna and Jason Hollar added RBI singles and Will Jilek followed with an RBI sacrifice fly and when the dust settled the River Rats had a 6-3 lead.

River Falls jumped out to a 3-0 lead in the top of the first on an RBI single by Ty Denzer, an RBI fielder’s choice by Andy Metcalf, and a bases-loaded walk to Ragan Pinnow.

After Hudson’s six-run sixth inning, River Falls got a pair of runs in the top of the eighth on a Spencer Dierdrich sac fly and a Lucas Luedtke single to make it a 7-5 game. River Falls had runners at first and second with one out in the ninth but Hudson pitcher Owen Weadge got a strikeout and fly out to center to end the game.

Wedge pitched the final four innings in relief of Anderson to earn the win, allowing two earned runs on three hits with four strikeouts and four walks. Donna had two of Hudson’s six hits, including a double.

Jake Lindsay took the pitching loss for River Falls after allowing seven earned runs on six hits with six strikeouts and one walk. Kyle Fritz struck out two in two scoreless innings of relief. Denzer collected two hits at the plate, including a double.

The victory left the Fighting Fish at 11-1 in SCVBL play while Hudson improved to 9-6 and clinched a berth in the Wisconsin Baseball Association playoffs.

River Falls has a pair of non-league games this week at home against the Centennial Cougars Wednesday night and the Keewaskum A’s Friday night before returning to SCVBL action against the Osceola Braves Saturday night, July 23, at 7 p.m. at First National Bank of River Falls Field.

Hudson is home for a pair of SCVBL games this weekend– Saturday against the Plum City Blues and Sunday against the New Richmond Millers. Both games begin at 1 p.m. at Grandview Park.