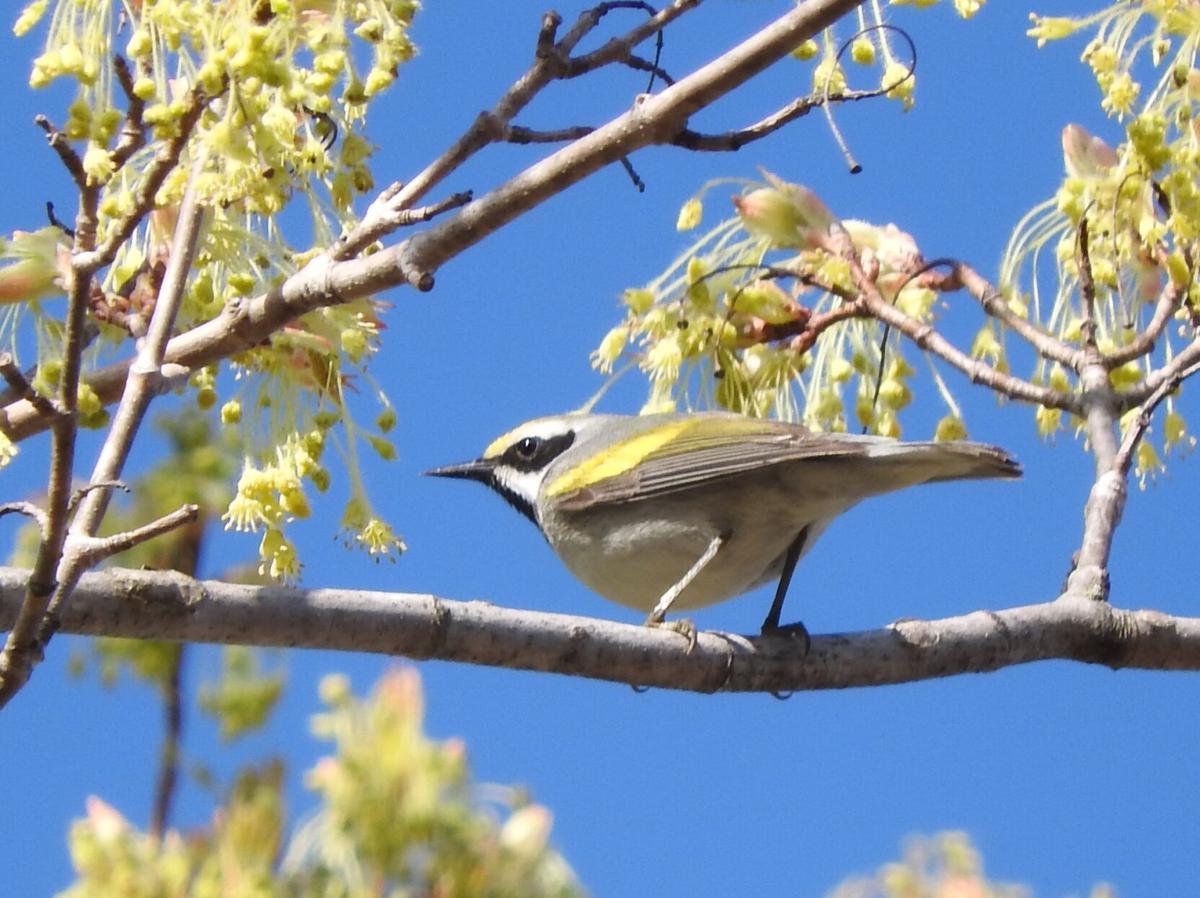 The golden-winged warbler is one of the fasted-declining birds in North America. Emily Stone photo 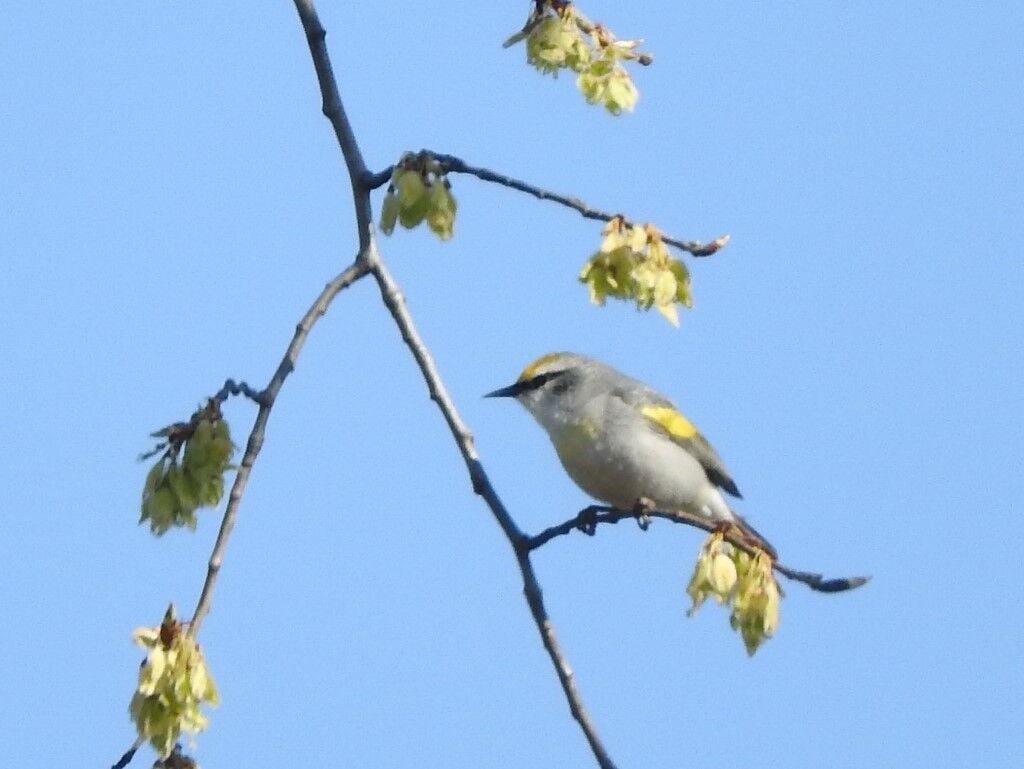 This Brewster’s warbler is actually a hybrid between a golden-winged warbler and a blue-winged warbler. The mixing of their gene pool may affect their survival. Photo by Emily Stone

“That’s it! That’s the golden-winged warbler!”

A dozen pairs of eyes and binoculars soon found the little singer, flitting around the backside of a willow thicket. Those thickets, and this bird, are two of the main reasons that Brad leads a field trip to the Bibon Swamp almost every spring for the Chequamegon Bay Birding & Nature Festival.

Just a little farther down the dead-end gravel road, we heard another bee-buzz-buzz-buzz. Necks craned up, and we were soon admiring the yellow cap, black-and-white face, black throat, and yellow wingbars of our quarry as he foraged among the tiny flowers in a sugar maple tree — visible at last.

The Bibon Swamp is prime habitat for golden-winged warblers as they seek shrubby wetlands for nesting, and then move to mature forests nearby as soon as their chicks fledge. The tangled mess of alder, muck, and tussocks may not look inviting to us, but researcher David Toews told me “they are pretty particular about the crappy habitat that they like.”

Loss of that “crappy” habitat is a big reason why golden-winged warblers are one of the fastest declining songbird species in North America. Their population has dropped by 68% since 1966, and they now have the smallest population of any bird not on the endangered species list.

Wisconsin, Minnesota, and Manitoba are their last strongholds. Happily, the Bibon Swamp is protected both as a Wisconsin State Natural Area and an Important Bird Area.

Even this big block of prime habitat can’t protect the birds from all perils, though, and we found one potential threat singing nearby.

The now-familiar bee-buzz-buzz-buzz song sent us scanning the thickets in the hope of glimpsing yet another individual. We found this one crooning from the dangling twig of an elm tree, while picking insects out of the flowers. Thankful to have a clear shot, I focused my camera just as Brad was getting a good look with his binoculars.

Suddenly, the excitement in his voice went up a notch. “It’s a hybrid! This is the Brewster’s!” Zooming in on the photos I had just snapped, I could see that this little guy (we knew it was a male because of the song) had the same gray body, needle-sharp bill, yellow cap, and yellow wingbar as the other golden-winged warblers we’d spotted, but this individual had only a black eyeline instead of a full mask, and no black throat.

In 2016, David Toews (then a post-doc at the Cornell Lab of Ornithology and now a professor at Penn State) and Scott Taylor dove into the genetics of these two visually distinct birds. Toews and Taylor found that the birds are 99.97% alike, with only six regions on their genomes that differ significantly. Those regions code for two of the most striking differences in appearance between the two birds: throat color and body color. Just a tiny change produces a very different-looking bird.

Remember those Mendelian genetics you learned about in high school? Gregor Mendel grew pea plants, and discovered that some traits — like purple flowers— were dominant, and others — like white flowers — were recessive. In order to produce a white flower, the plant must have two copies of the recessive gene. Otherwise the dominant trait will show through.

As it turns out, the white throat and white body of this Brewster’s warbler represent the dominant traits. The black throat of a golden-winged warbler and the yellow body of a blue-winged warbler are both recessive traits. They rarely show up in the same bird, but when they do, we call it a Lawrence’s warbler.

Our little group of birders wandered on from there, eventually identifying 40 species of birds by sight and sound. I kept mulling over what I’d read the night before, though. Some scientists worry that the interbreeding of these two warbler species, and the resulting hybrids like the one we just spotted, are a dire threat to the already-declining population of golden-winged warblers.