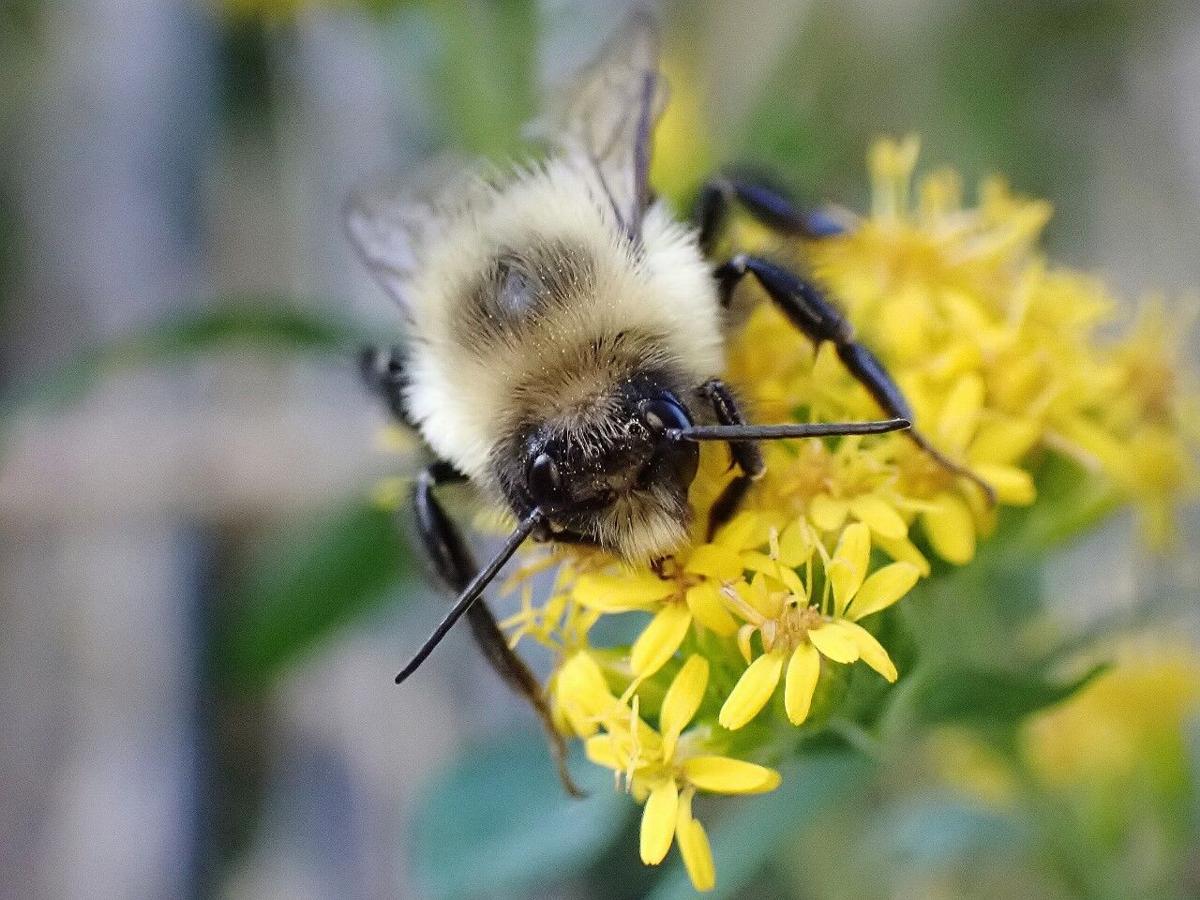 Male common bumble bees, known as drones, have fuzzy yellow hairs on their face, while the females have black faces. Males are also smaller. Photo by Emily Stone 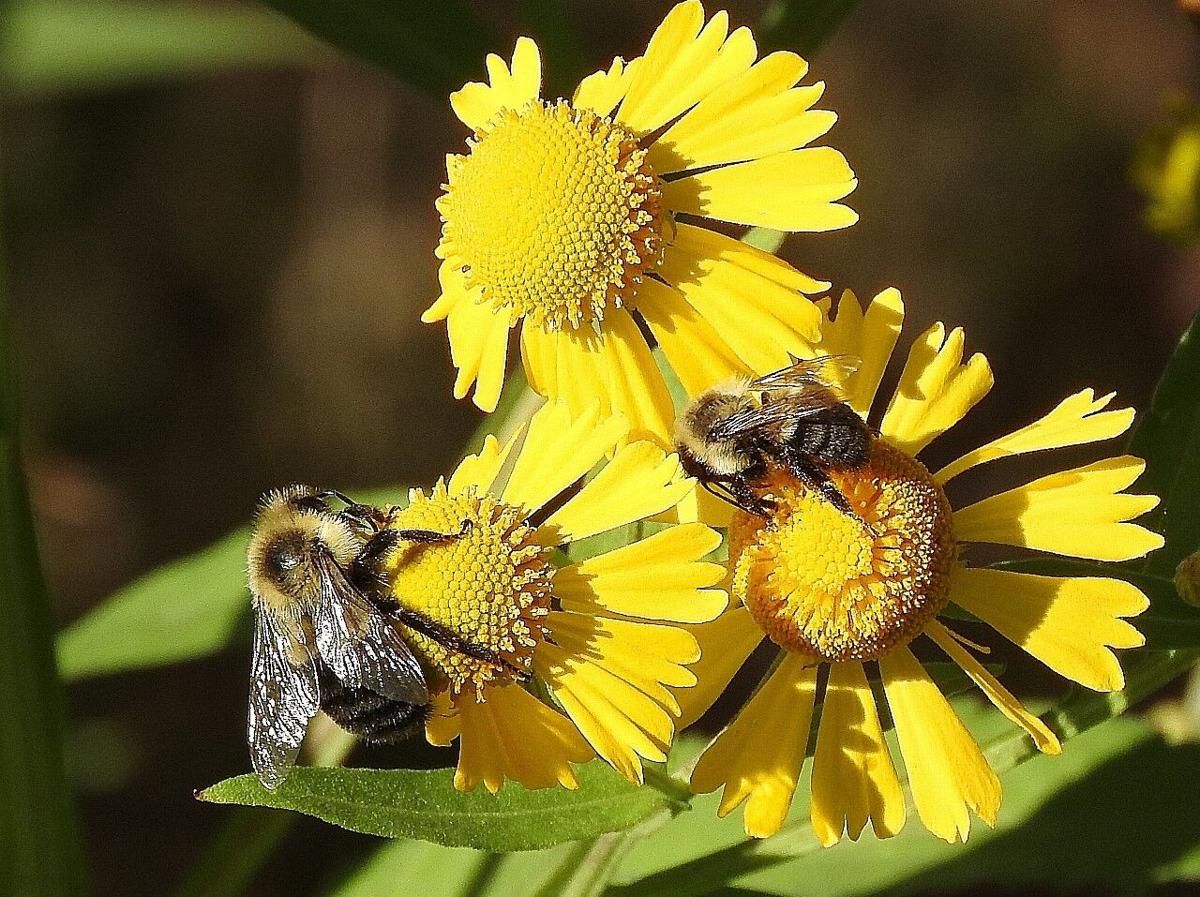 The larger bee on the left is a new queen common bumble bee who is storing up fat for hibernation. The smaller bee on the right is a worker, who will take pollen and nectar home to the colon to feed any remaining larvae until the metamorphose into the reproductive generation of drones and queens. They are both enjoying resources from common sneezeweed, a native aster. Photo by Emily Stone

Male common bumble bees, known as drones, have fuzzy yellow hairs on their face, while the females have black faces. Males are also smaller. Photo by Emily Stone

The larger bee on the left is a new queen common bumble bee who is storing up fat for hibernation. The smaller bee on the right is a worker, who will take pollen and nectar home to the colon to feed any remaining larvae until the metamorphose into the reproductive generation of drones and queens. They are both enjoying resources from common sneezeweed, a native aster. Photo by Emily Stone

My office window looks out onto the Cable Natural History Museum’s backyard and the pollinator gardens that grow there in tousled abundance. Wildflower season peaked weeks ago, but gems of color still glint in the afternoon sunshine. Once-fragrant bergamot has dried into tufty brown seed heads, but the golden petals of black-eyed Susans and lance-leaved coreopsis contrast nicely with the frilly purple petals of asters. Those complementary colors are more beautiful — and more attractive to bees — than either on their own.

And, despite chilly nights and damp mornings, there are still bees. I’m watching them fly busily on their rounds as I write this, actually. We’re all reveling in the afternoon sunshine.

Earlier that morning, I shuffled through damp grass to see how they were doing, and to observe the insects when they were too cold to zoom away. Sure enough, I found a few fuzzy bumble bees clinging to the tufts of pollen-coated anthers like sleepy toddlers. These bees aren’t young’uns, though; they are nearing the end of their lives.

Bumble bees are one of the only types of native bees who form a colony — similar to honey bees — where a single queen produces 50 to 500 worker bees. She laid eggs all summer. The first round she fed and raised herself.

In five weeks, those eggs hatched into larvae, pupated, and metamorphosed into adults. A few days after reaching maturity, that first generation took over care and feeding of their sisters. More bees could raise more bees, building on the colony’s success until the ultimate test this fall.

That test? Raising a set of new queens who are built to survive the winter.

First, the old queen begins to lay unfertilized eggs. These will grow into male drone bees whose one job before they die is to fertilize females from a different colony.

The act of laying unfertilized eggs triggers the queen to stop producing a particular pheromone. With that pheromone gone, the workers change their behavior, and start raising the fertilized eggs not as worker females, but as new queens.

I was hoping to find one of those new queens on my little backyard safari, but armed with a millimeter ruler, I only found 16 mm long common bumble bee workers (Bombus impatiens). Queens are at least 17 mm, according to the literature.

These workers must still be seeking provisions for their colony, in a race against the frost. Not all nests get their timing right, and some succumb to killing cold or starvation before they can send their reproductive generation into the world.

To be successful, a new queen must stuff herself on nectar and pollen to build up fat stores for hibernation, the same way grizzly bears in Alaska bulk up to compete in Fat Bear Week in Katmai National Park. For a male drone to be successful, he just needs to stay alive long enough to mate with a female.

He dies. She digs in for a long, cold winter.

This is different from honey bees, whose sugary stores allow the hive to survive the winter.

Bumble bees, like many tiny critters, endure the off-season in shallow, soil burrows protected by fallen leaves and eventually by an insulating blanket of snow. As I poked around looking for more bees, I was happy to see a tangle of dead leaves and stems in the pollinator garden. They will insulate the plants’ roots, and keep uncountable critters cozy through the drastic temperature swings and freezing cold.

Yards that are too “clean” provide little shelter for our wild neighbors, and something as simple as not tidying up our gardens can save thousands of little lives.

And here, I’ll pull back the curtain a little bit. I wrote this much on one day, and then headed out on a geology field trip before finishing the article. On my way home, I decided to hike St. Peter’s Dome to catch peak fall colors from that spectacular viewpoint.

Right where the trail starts, the Forest Service had planted a profusion of asters and goldenrod who were receiving the full force of the low afternoon sun. And on those flowers were more bumble bees that I’ve ever seen at one time. More than 20 crawled on a single plume of goldenrod.

By the time I hiked back down from the view (spectacular!) the sun had set and temperatures had dipped to 55 degrees. Now the bees were clinging to the flowers wherever they’d last been feeding, their muscles slowed and paralyzed by the chill.

This made them much easier to photograph! I found a large queen with a yellow mane of fuzz, many smaller workers, and several males with their yellow goatees. I even spotted a worker with the rusty stripes. Two hundred photos later, I finally headed home.

This is a perfect example of why I love writing about seasonal events as they happen. Without having done some research on the handful of bees in our pollinator gardens, I wouldn’t have known what I was looking at when I found the profusion of bees along the trail. These coincidences bring me joy — and I hope they enhance your enjoyment of nature, too!