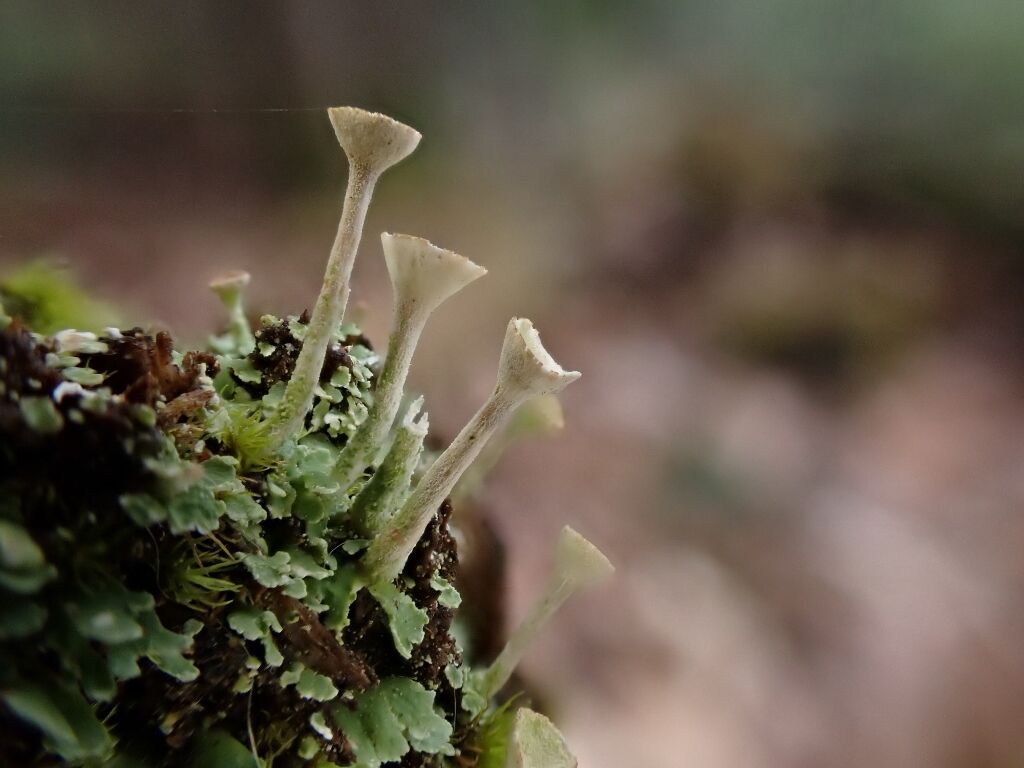 This is pixie cup lichen. According to the Wisconsin Department of Natural Resources, there are 48 lichens on the state's Natural Heritage Working List. Lichens are a symbiotic combination of two or occasionally three organisms: a fungus and a photosynthetic algae and/or cyanobacteria. As such, they don't fit into the traditional definition of a plant. Emily Stone photo 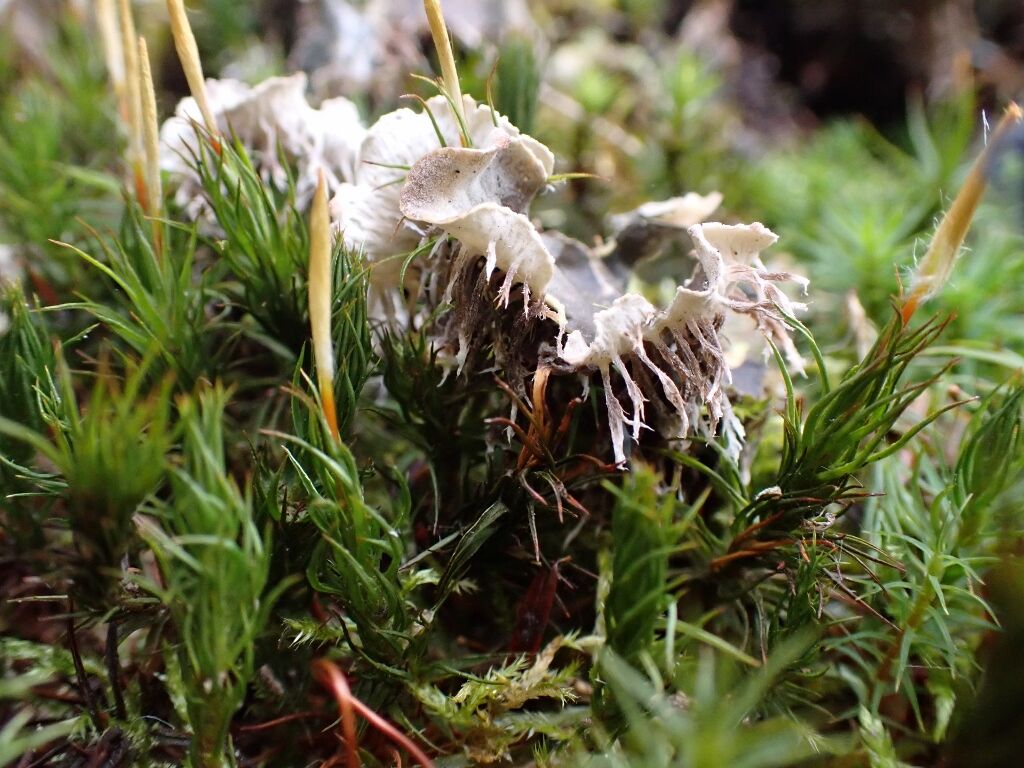 Spending time in nature — looking at living beings like lichens and moss—has been shown to improve mental health. Photo by Emily Stone

This is pixie cup lichen. According to the Wisconsin Department of Natural Resources, there are 48 lichens on the state's Natural Heritage Working List. Lichens are a symbiotic combination of two or occasionally three organisms: a fungus and a photosynthetic algae and/or cyanobacteria. As such, they don't fit into the traditional definition of a plant. Emily Stone photo

Spending time in nature — looking at living beings like lichens and moss—has been shown to improve mental health. Photo by Emily Stone

Inhaling deeply, I looked out across the sunny expanse of frozen lake. Squeezing my shoulder blades together, I corrected my computer-hunched posture and felt tension release from sore muscles. A vigorous gale tossed through the treetops, but here, on the leeward shore, I felt only a hint of breeze on my cheek. With another deep breath, I began to turn around, but an oak leaf caught my eye.

With pointed tips curled up like a cupped hand, the tan-colored leaf had become a tiny boat on a clear puddle at the edge of the ice. As I watched, a sliver of wind snuck down and sent the leaf spinning gracefully to the left. A darker brown birch leaf, diamond-shaped with finely serrated edges, traced the same path across the puddle, and its tip slid in to catch a lobe of the oak leaf. Like a pair of dancers, the two leaves twirled and glided on the puddle, pushed by the chaotic wisps of breeze. Such playful movements made me smile.

When I’d stood up from my computer in a huff a few minutes earlier, vexed by the trickle of spam emails that kept interrupting my thoughts, and cursing the people who sent them, I wasn’t sure that a walk would help. Research shows that people tend to underestimate how good a simple walk outside will make them feel. But, as I climbed up from the shore, I caught myself smiling at the sunny carpet of mosses who had wasted no time in waking up from winter.

That warm fuzzy feeling I was having toward the moss actually has a name: biophilia.

Edward O. Wilson, a revered ecologist and champion of biodiversity, made the term popular, and defined it as “the innately emotional affiliation of human beings to other living organisms." He hypothesized that our love of nature has helped humans survive, and helps us feel connected to all life.

As I sauntered down my long, winding, woodsy driveway, even more benefits of this biophilia were at work on my brain. The way my eyes scanned the forest, noticing the red buds of a maple tree against the blue sky, the gentle curves of the forest floor that will soon be hidden by new growth, and the patterns of moss and lichens that carpet the side-hill, leads to something that scientists call “soft fascination.”

Soft fascination — as opposed to the “hard fascination” of something like a sports event or movie that demands full attention — requires no effort and leaves space for reflection without risking boredom. Soft fascination leads to clearer thinking, reduces anxiety, and restores our ability to focus on tasks later. While our mind wanders, we may end up solving problems or coming up with creative ideas.

Research also shows that, while in nature, people tend not to ruminate on the stuff that causes anxiety

I watched leaves dance on a breeze-tickled puddle. But sunsets, rain showers, parks, and forest paths are also opportunities to experience the brain-resting effects of soft fascination. Just be sure to leave your phone out of reach: talking while walking ruins the effect.

The benefits of time spent outside, especially in green nature, are especially noticeable for people who have attention-deficit/hyperactivity disorder. During an experiment at the University of Illinois, kids who took just a 20-minute walk in a park had their symptoms of ADHD reduced by threefold. That improvement was roughly equal to the difference in having ADHD or not having it, or of not being medicated vs. experiencing the peak effects of a common medication.

Not only do kids show improvement in focus and memory when they get to be outside, they may also show less anxiety, depression and aggression than when they are indoors in a restrictive environment. Erin Kenny, founder of a nature school, put it this way: "Children cannot bounce off the walls if we take away the walls."

Everybody loves to hear a bird sing

Adults aren’t much different. I’d been bouncing off my mental walls at the computer all afternoon, and now a short walk was completely changing my mood. The chickadees were helping. “Hey Sweetie!” came their cheerful whistles from the hemlock twigs above my head. I’ve been using the calls of chickadees to cheer me up ever since a particularly stressful week back in college.

It’s no longer breaking news that relaxing in nature makes us happier, but it is worth repeating. Nature relieves mild depression, reduces stress, and increases happiness for both adults and children. And, without the icy winds of January or the mosquito-hordes of July, this is the perfect season to walk slowly through nature. Go find a puddle, a leaf, a breeze, and some birdsong, and you will also find an increase in well-being.